Canadian Tourist Dies After Falling Into River In La Fortuna

A Canadian tourist who disappeared Thursday night was found dead Friday afternoon in the La Palma river, in La Fortuna de San Carlos, where he apparently accidentally fell from a height of 50 metres (164 feet).

The man was identified as Alen Grant Kelly, 58, by the Organismo de  Investigación Judicial (OIJ).

Preliminary reports indicates that Grant left his room for walk towards the back of the hotel he and his wife were staying, when reaching the edge of the ravine, where it is believed he possibly slipped and fell into the river. His body, recovered Friday afternoon by Cruz Roja (Red Cross) and Bomberos (Fire Department), had wounds and fractures in various parts of his body. 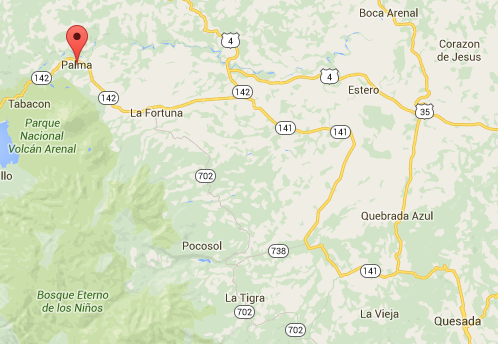 It is not yet known when Grant and his wife, Valeria James, arrived in the country.

La Palma is a community located at the foot of the Arenal volcano, seven kilometres (4 miles) from the town of La Fortuna, a popular tourist spot.