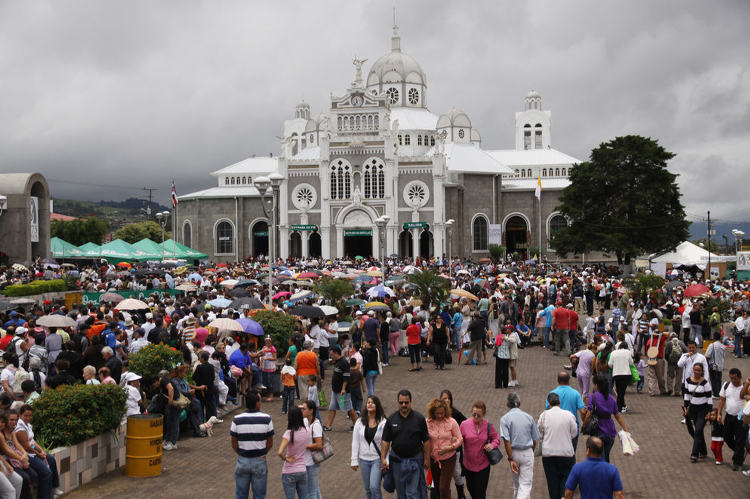 The traditional “romería” to Cartago is around the corner. And like the last couple of years, the Catholic Church estimates more than 2 million will make the annual pilgrimage.

The romeria is a Catholic celebration that consists of a trip or peregrination (in cars, floats, on horseback or on foot) that ends at a sanctuary or hermitage. In Costa Rica, it is the Basilia de Los Angeles, to make requests and give thanks to the Virgin Mary black statue, locally nicknamed La Negrita, located inside the cathedral. People all over the country and even other Central American countries attend.

But is the annual estimation correct? Or is the Church inflating the numbers?

The Chancellor of the Diocese of Cartago, Father Francisco Arias of the Catholic Church insists that according to Church calculations – based on studies by the Universidad de Costa Rica and the  Instituto Tecnológico de Costa Rica  – at least half of the Costa Rican population (of 4.5 million) make the the walk to the Basilica starting on July 23.

However, the School of Statistics at the Universidad de Costa Rica (UCR) set get a more accurate read on the number of “romeros” that take part the religious celebration each year.

Johnny Madrigal, lead investigator, says that the study reveals that for three consecutive years – 2010, 2011 and 2012 – the average number of participants does not go past 770.000. This, far less than the numbers provided by the Church.

Madrigal explained that the data was obtained through a survey that was carried out by telephone to 700 homes across the country during the 15 days of the pilgrimage.

Respondents were asked if they attended the pilgrimage, regardless if they did so on August 1 and August 2 – the days that sees the highest number of people mobilize to the Basilica – or if they did so in the days before.

According to the study the sample calls –  only to homes that have residential phones – was broken down to 55% in the Metropolitan areas of San José, 25% to the rest of the Central Valley and 20% to the rest of the country, with the head of the household (the person who maintains the economic pulse of the family) responding 95% of the times.

The complete results of the survey can be found here. 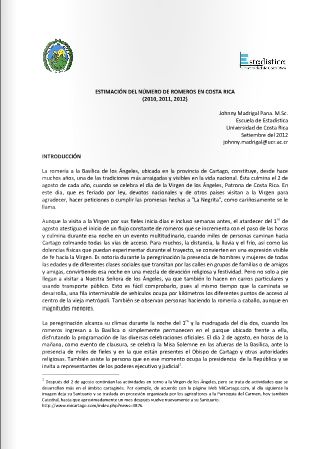