CCSS testing center at the border with Nicaragua shot at

(QCOSTARICA) The headquarters of the Phytosanitary service of the Caja Costarricense de Seguro Social (CCSS), at the Peñas Blancas border with Nicaragua was attacked on Wednesday night, while personnel carried out COVID-19 screening. 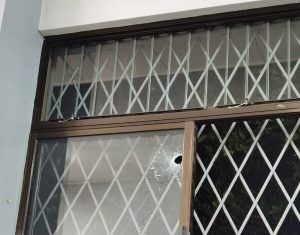 The event occurred at 6:48 pm when five officials from the health area of ​​La Cruz carried out the test for the new coronavirus on a trucker and several national and resident passers-by.

At that moment, a projectile went through a kitchen window of the building and bounced off the wall, without hitting any of those present. A cleaning officer, another from medical records, a nurse and two doctors were surprised by the strong detonation and the smell of gunpowder.

Although no worker was injured, they were subjected to an anxiety crisis due to the situation, according to the CCSS.

At this border point, the institution maintains COVID-19 screening from 6 am to midnight, in two shifts.

Personnel from the National Emergency Commission (CNE) also work at this headquarters, but none were present at the time of the incident, their work is only during the day.

The Organismo de Investigacion Judicial (OIJ) is investigating, presumed is that the attack was carried out by an organized criminal group.

The headquarters is located near the border line where illegal trade, prostitution, and human trafficking are common at night.

(QCOSTARICA) With the opening of the air and sea borders to...
Read more

What will happen to the Nicaraguans rejected by their country?

Gasoline prices will be cheaper on Wednesday

QCOSTARICA - On Wednesday, October 28, the lower fuel prices for Super, Plus 91 and Diesel fuel will go into effect. Prices at the pumps...
Read more
HQ

QCOSTARICA - The Vatican will wait for the Legislative Assembly to begin the discussion of the secular state before giving Costa Rica legislators an...
Trends

If you want to create an effective app for your business, you might need to decide where you want to host it in the...
Politics

Legislator: “There is no prostitution anymore because there is no tourism”

QCOSTARICA - In the middle of the discussion about the project to revive trawling on Thursday, independent legislator Zoila Rosa Volio was very critical...
Nicaragua

TODAY NICARAGUA – The 70 votes of the ruling Frente Sandinista (Sandinista Front) in the National Assembly approved, without opposition, the Special Law on...
Politics