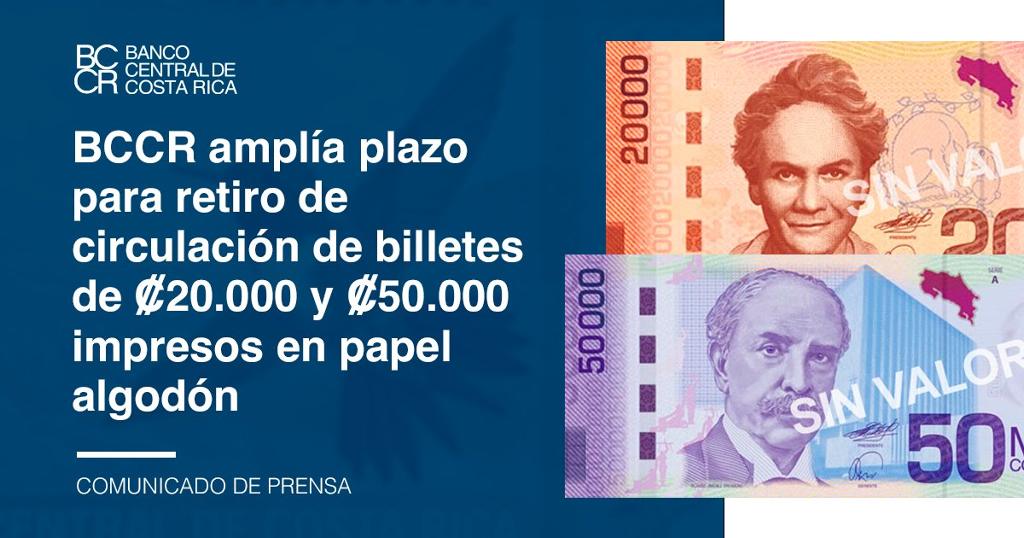 QCOSTARICA – The Central Bank (Banco Central de Costa Rica (BCCR) informed this Wednesday morning that it has extended the withdrawal of circulation of the ₡20,000 and ₡50,000 banknotes printed on cotton substrate.

The new date for both banknotes to go out of circulation is February 1, 2022, that is they can continue to be used as legal tender for any transaction until the end of January next year and not December 31, 2021, as had been previously announced.

It is important to point out that neither at this time nor after next January these tickets will lose their monetary value, in that they can be deposited into one’s bank account or exchanged for new bills at any financial institution.

The BCCR took into account that at this time of year many people take the opportunity to vacation in areas far from urban centers, which affects public availability
to carry out the banknote exchange management, in addition to the fact that banking services are decreased on these dates.

The Central Bank recommends that anyone facing an “inconvenience” for the
exchange or deposit of banknotes at banks or ATMs or that ATMs dispense the older bills, to file a report to the BCCR by phone 2243-3333 or by email at atencionalcliente@bccr.fi.cr.