Chávez Without The Charm

(The Economist) WHATEVER his awful defects, Hugo Chávez showed it when he was riding high as Venezuela’s firebrand leader. So too did Fidel Castro when he played a similar role in Cuba. A strongman in a crisis needs charisma. Nicolás Maduro, Venezuela’s current president, has none. 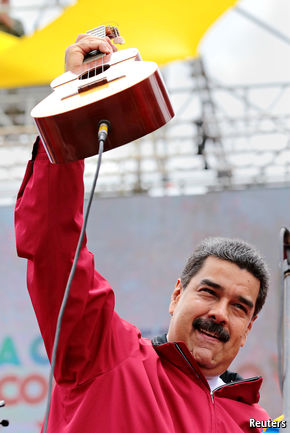 Take, for example, the moment on September 2nd when his motorcade passed through the gritty municipality of Villa Rosa on the island of Margarita. This used to be a red district, whose residents mostly backed the ruling leftists in December’s elections. But that support is vanishing. Margarita, like the rest of the country, has seen months of food and power shortages and, in particular, a lack of running water. When locals heard the president was coming, they reacted with a show of cacerolazo—banging pots and pans.

Hearing the commotion, Mr Maduro tried working his charm on the masses as his predecessor might have done. But the jeering grew. After some brusque exchanges, he set off on a sort of defiant jog through the crowd. But it looked more like running away. At one stage he seemed to lash out at a saucepan-wielding lady.

This farce, recorded on mobile phones, soon went viral on social media, thanks to sharing by a prominent opposition journalist, Braulio Jatar. He has since been arrested and, supposedly coincidentally, charged with money-laundering. The incident capped a disastrous few days for the president. On September 1st the opposition held a march, dubbed the “taking of Caracas”. Despite government closures of roads and transport, as many as 1m protesters took to the streets. Their ostensible aim was to accelerate a “recall referendum” which could oust Mr Maduro: the pro-government electoral authorities are deliberately stalling. But, perhaps more significant, the march was a vivid demonstration that the Chavista movement is now outnumbered by the opposition.

Mr Maduro seems unable to accept that. During the “taking of Caracas”, he held his own rally. Tens of thousands of his supporters were there; many had been bused in by government vehicles. He derided the rival event, insisting that only 35,000 people had showed up. Wielding a guitar at one point, he used even cruder language than usual. On daytime TV, he called the head of the national assembly, Henry Ramos Allup, a “motherfucker”. In a bid to exaggerate his support, a huge TV screen was mounted behind the podium. Officials tweeted images of a big red-shirted march. It emerged that these actually showed another rally, from 2012, when Chávez was alive. A national assembly staffer who tried flying a drone over the opposition march, to show its size, was jailed.

A decree by the government-appointed supreme court to invalidate all future decisions by the national assembly has made a political solution elusive, at least while Mr Maduro hangs on. Will his cronies ditch him? Vladimir Villegas, an ex-ambassador who hosts talks between government and opposition, hinted at this. He told a Colombian newspaper, El Espectador, that those in power were struggling with the “new reality” that their term could be finite. Some might see Mr Maduro as dispensable, he said: a movement would not be sacrificed for “an already worn-out leadership.”

From the print edition: The Americas

- Advertisement -
Paying the bills
Previous articleWill Or Will He Not? The Answer Maybe Tonight. Or Not.
Next articleCan Maduro Remain in Power As Venezuela Erupts in Protest?

QCOSTARICA - The proportion of young people who do...
Central America