The song of the cicada and a smidgeon of witchcraft. 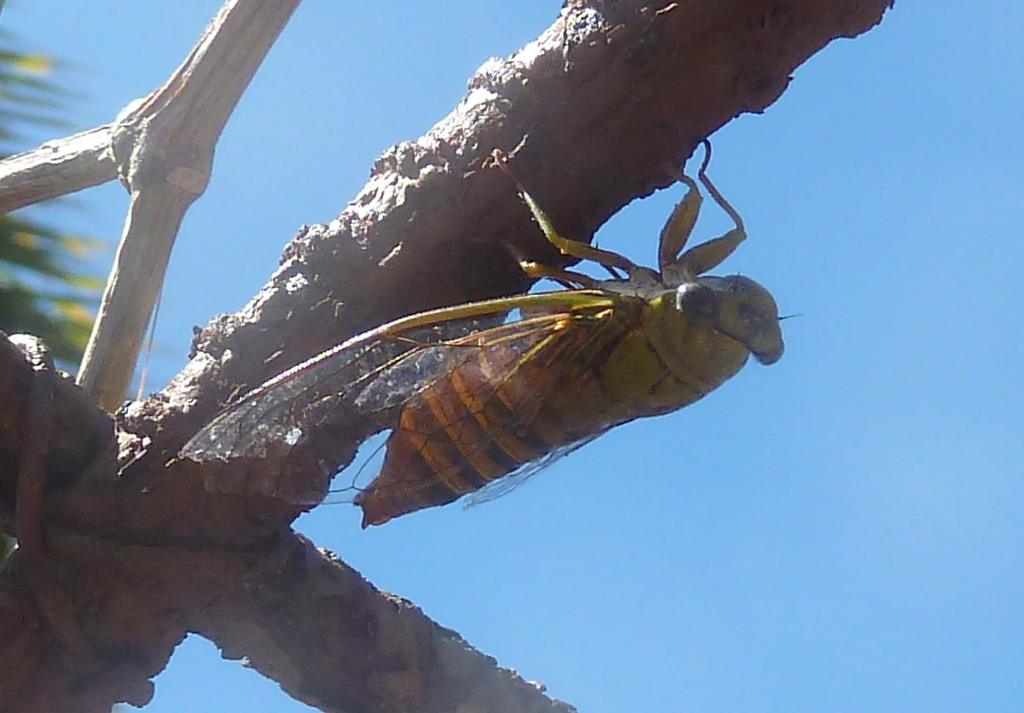 FINCA PARAISO (QCOSTARICA) At this time of the year many forested parts of Costa Rica are alive with the song of chicharras, cicadas. They are also known as cigarras in Spanish, but chicharra is more commonly used in Costa Rica.

Despite the overwhelming noise, the cicadas generally remain well hidden in the trees—they are a juicy morsel for many predators.

I grew up calling these creatures locusts, but this is completely inaccurate. Locust refers to several species of short-horned grasshopper. These grasshoppers can arrive in large swarms and consume vast amounts of vegetable material, including crops.

In Spanish they are known as langostas or, more commonly in Costa Rica, chapulines. The cicada does no such damage.

The life cycle of cicadas is varied and complicated. There are roughly 3,000 species of cicada in the world, many undescribed and unstudied. The song of the chicharra is produced only by the male in search of females. The sound is produced by special organs called tymbals. In fact, cicadas are deaf and the female is attracted to the vibration rather than the sound.
Once mated, the female lays her eggs in a slit she makes in the bark of a tree. The sap of the tree nourishes the eggs and nymphs develop. The nymphs fall to the ground where they burrow into the soil and feed on sap from the roots.

The nymph stage of the cicada spends between one and seventeen years living in the ground. Some species emerge in unison, while others come out in batches yearly—not all the same individuals as the crop of nymphs from the year before.

In Costa Rica, the average time spent in the soil as a nymph is four years. The nymphs emerge and with one molt—shedding of the exoskeletons—take on adult form. So the chicharras you are hearing this year, probably entered the ground as nymphs four years ago.

The song of the cicada is very loud—as high as 115 decibels—about the level of a rock concert. It is loud enough to damage human hearing.
My significant other is a Costa Rican woman in her middle sixties. We recently spent a few days in a cabin surrounded by trees and huge numbers of chicharras. She took great pleasure in chanting, “Maro, Maro, Maro.”

Apparently, as a child, she was taught this incantation would make the chicharras fall out of the trees. An interesting piece of Tico witchcraft—brujería—or folk belief—agüizote.

Try to take some time to get out in the countryside and enjoy the song of the chicharras.

It’s a wonderful seasonal reminder of the complexity of Nature.

- Advertisement -
Paying the bills
Previous articleAlert in Colombia due to the start of the first rainy season
Next articleMore than 36,000 people in indigenous territories will have telephony and internet

Jack Donnelly
Jack Donnelly is a writer, photographer, and speaker living in San Pablo de Heredia. His topics of interest include Costa Rican folk culture, national traditions, traditional cuisine, ecotourism, and wildlife. Donnelly is the author of COSTA RICA: Folk Culture, Traditions, and Cuisine which is available on Amazon in paperback and Kindle.

Bit(coin) More Than You Can Chew?

Over the last decade or so, the digital world...
Politics