COSTA RICA NEWS – The ties between China and Costa Rica are “like a growing elephant-ear tree of the Americas,” Chinese President Xi Jinping said Wednesday, using the eye-catching local plant to depict the friendly relations between the two geographically far-apart countries. 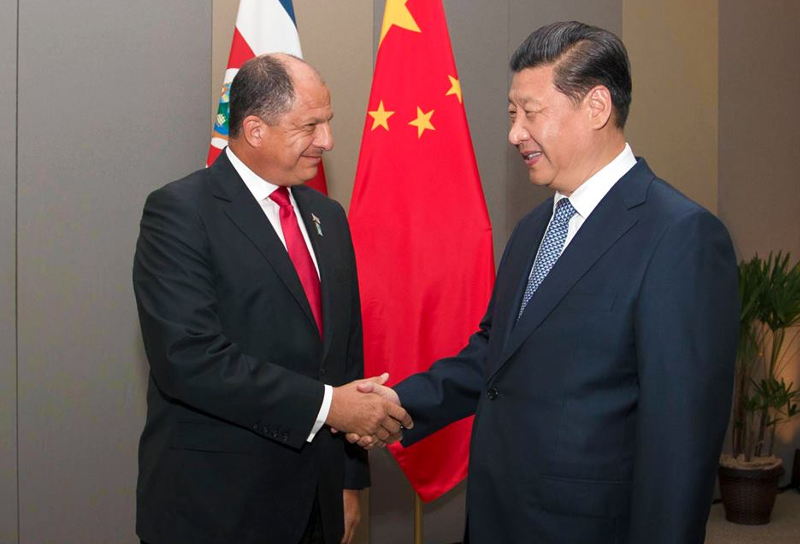 Xi’s comments were made during the  presidential meeting between leaders from Latin America, the Caribbean and China being held in Brazil,  by the members of the group formed by Costa Rica, Cuba, Ecuador and Antigua and Barbuda, CELAC (Community of Latin American and Caribbean States),  and the presidents of the member countries of Unasur (Union of South American Nations) and Mexico.

In a meeting with Costa Rican President Luis Guillermo Solis, Xi said that China is ready to work with Costa Rica in an effort to make the root of political mutual trust deeper, foster the bulk of mutually beneficial cooperation stronger and nurture the leaves of people-to-people communication blossoming, “thus making the whole tree bear good fruits.”

The two countries should “continue to render mutual support on major issues concerning the mutual core interests and enhance communication and coordination on such major global and regional issues as climate change and sustainable growth,” he added.

On economic cooperation, Xi said the two countries could make good use of the China-Costa Rica free-trade agreement, improve the bilateral trading mix and strengthen cooperation on infrastructure, agriculture, science and technology and clean energy.

“China is willing to import more commodities from Costa Rica,” he added.

He also encouraged the two sides to increase cooperation and exchanges in cultural area and among localities and young people.

Noting that both Costa Rica and China love peace and pursue progress, Solís said Costa Rica appreciated China’s support and assistance for the country’s economic development and the improvement of people’ s livelihood.

Costa Rica is ready to strengthen political exchange, expand economic and trade cooperation and promote people-to-people exchanges with China, he said, adding that his country hopes to build a “Great Wall” of solidarity and cooperation between the two countries.

In addition, he said Costa Rica welcomes Chinese participation in its infrastructure construction.

On regional and global issues, Costa Rica is willing to enhance communication and coordination with China, support and actively participate in Latin America-China cooperation for promoting the formation of a fairer and more rational international order and safeguarding the interests of rights and interests of developing countries.

QCOSTARICA - The value of Costa Rica exports increased by 23% in the first five months of the year, being the highest growth in...
Crime

QCOSTARICA - A Costa Rican tried to enter the country through the Juan Santamaría International - San Jose Airport - with US$153,244 (the equivalent...
Economy