Chinchilla: “No Corruption In My Government” and “No Censorship”

In an interview with the Spanish newspaper El País, Costa Rican president Laura Chinchilla Miranda said that there is no corruption in her government and there is free speech, without any kind of censorship to any dissident group, political party, etc. 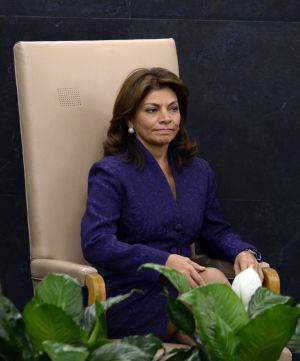 The interview was made after Chinchilla delivered her speech to the United Nations earlier this week.

The publication was quick to point out that Chinchilla has only seven months left in her mandate and is leaving office with a very low popularity – and still dropping – since taking office in May 2010 and that the tiff with Nicaragua is the saving grace of a government full of scandlals, and the disappointment of the population who believe her government is corrupt and she has not been effective in her mandate.

Asked what does she expect from a strong UN complaint against Nicaragua, the Chinchilla made it clear that Costa Rica’s raised voice before the UN is not rhetoric, rather in defence of international rights.

Chinchilla defends her work as befallen by times of uncertainty, especially with the international crisis that has also affected a small country like Costa Rica and the threats of the drug traffickers and organize crime.

Chinchilla was quick to point out that the achievements of her government include a reduction in the homicide rate and economic growth that has achieved exceptional goals.

Faced with what the surveys that say she being the worst president in the hemisphere, Chinchilla said that a president is not measured by what the polls say, rather how it leaves the country and the end of the term. In the case of Costa Rica it being in better shape than the rest of the countries in the region.

“As for the popularity ratings compared among Latin American leaders, that’s like comparing apples and oragnes. Costa Rica has an active and intense regime of free speech. There is absolutely no sensorship for any dissident group, political or media, something that does not exist in other Latin countries”, said Chinchilla.

Asked about the main complain of most Costa Ricans being a high degree of corruption in government, Chinchilla defended herself saying that it has been the government to uncover corruption and it (corruption) does not exist in her government, rather in the “administration”.

“We have adopted a very different style of government than in the past and it has cost us”, said Chinchilla.

QCOSTARICA - Do you need a certificate of the COVID-19 vaccines applied in Costa Rica?  People who require a certificate that certifies the receipt...
Photos of Costa Rica

QCOSTARICA - The residents of the Central Pacific endured heavy rains Monday afternoon, June 7, hardest hit the town of Quepos, where the streets...
Travel