San José The Fourth in the World Most Vulnerable to Natural Disaster: Swiss Report

San José, Costa Rica’s capital city, is the fourth city in the world most vulnerable to natural disasters, according to a report by Swiss re-insurer, Schweizer Rück (Swiss Re).

Swiss Re, is a leading wholesale provider of reinsurance, insurance and other insurance-based forms of risk transfer. The report reads:

“In some conurbations, a natural disaster can have a devastating effect on the economy of the entire country.

Although potential economic losses in these cities are relatively modest, their importance as national centres of production places them among the top ten riskiest cities when measured by the expected fallout for their home countries.”

According to the study, the greatest risk facing Costa Rica is an earthquake. While in urban areas of Tokyo- Yokohama in Japan, an earthquake of great magnitude would affect 29 million people in the Greater Metropolitan Area ( GAM ) of Costa Rica it would be 2.2 million.

Our country would suffer a greater impact on the national economy, says the analysis, because it lacks most urban areas, in contrast to Japan.

The study analyzed the impact that would cause earthquakes, high winds, floods, storms and tsunamis in 616 urban areas in the world.

Seismologist Volcanological and Seismological Observatory of Costa Rica ( Ovsicori ), Marino Protti, told AmeliaRueda.com the research is biased and doubted its results. For the researcher, there are 20 cities most threatened in the world before San Jose.

In San José , only communities like Hatillo, Desamparados and Alajuelita that would be severely affected , in contrast to the impact faced by other Central American cities, to disasters.

Protti said there is a greater risk in the other capitals of Central America and in Ankara , Turkey , but do not appear in the document. 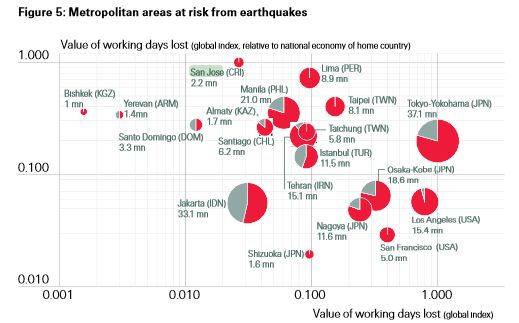 - Advertisement -
Paying the bills
Previous articleFIFA World Cup Trophy Arrives In Costa Rica Friday
Next articleChinchilla: “No Corruption In My Government” and “No Censorship”