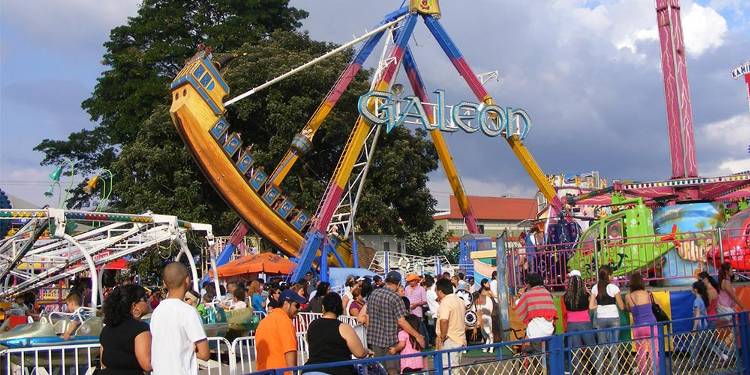 Christmas in San José is party time for everyone, from the family day activities, the bulls an night bars of Zapote, the Tope (horse parade) and the Carnaval.

Zapote
The fun starts on Christmas day when the Festejos Populares de Zapote (http://www.fiestaszapote.com/). The annual event that runs until January 5 has something for everyone: rides for the kids, the bulls for bigger kids and megabars at night for the partiers.

The Fuerza Pública (police) recommended moderation in the consumption of alcohol. The Chief of Police, Juan José Andrade, is also asking parents to ensure their children carry proper identificaton, that includes a contact number, in the case they get lost in the crowds. Andrade also recommends doing the same for seniors and the handicapped.

The Zapote fair is the largest of the season fairs, located in the Zapote fair grounds on the east side of San José, the 12 day event cannot be without the bulls.

Tope
The annual Tope or horse parade on December 26, making its way from the east of the La Sabana park, along Paseo Colón and onto Avenida Segunda.

Some 700 Fuerza Publica and 200 Municipal police officers will be on hand to keep things under control.

Carnaval
The Carnaval takes place on Friday (December 27). The annual event used to be held in San José, but for the last couple of years it was moved to Desamparados, the most densely populated areas on the south side of San José.

The event includes marching bands, floats, mascaradas and cheerleaders. A display of antique cars is also a staple of the carnaval.

This year the the event starts at the Nuestra Señora de los Desamparados high school and winds down at the Villa Olimpica, from 11am to 5pm.