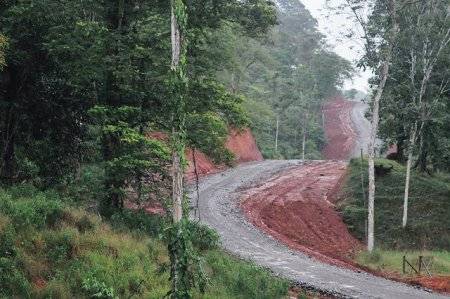 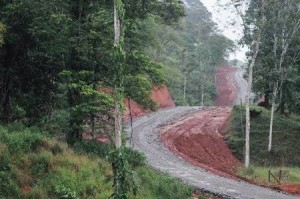 It appears that someone has taken an interest in the ranch called Los Chinos in the far northern part of this country. On Monday, a member of the Ministry of the Environment on routine inspection of deforested areas — Fausto Alfaro — found a third landing place for helicopters.

Alfaro said he has filed a complete report with the Ministry of Security and the OIJ investigative department. Last Monday police in Guacimo, Limon province, found a truck parked at a mechanics shop with a load of 27 barrels of Jet A-1 fuel like that used in helicopters.

The mysterious helipads began to turn up two weeks ago when police investigated one in which war-like arms were buried in a hidden cache, fuel barrels. It was 600 meters from two houses under construction. The second was 700 meters east of the first.

This third helipad was 600 meters from the entrance to the farm. Almost as an after thought, Alfaro and his crew found 5,000 square meters of stumps where trees had been cut for lumber, apparently illegally. The illegal logging is serious enough but the arms and presence of helicopters so close to the Nicaraguan border caught the attention of those who love a good mystery.

La Nacion also found that residents of the village of Patastillo de Cutris a little closer than seven kilometers from Los Chinos farm saw a green helicopter flying over the farm Monday. Others said they had only heard an aircraft engine.

In line with the discoveries, residents of a village, Coopevega, 17 kilometers from the farm reported a group of strangers who came to the village three months ago, bought 300,000 colones worth of supplies and building materials. Was that for the two houses discovered at the first helipad? Stay tuned.

QCOSTARICA - Mexico has been one of the favorite...
Trends