The National Human Development Report 2003 of the United Nations reveals that 48% of Costa Rica’s 4.6 million population say they have been discriminated against at some point.

The major causes of discrimination were age, religion and sex, followed by skin colour, disability, ethnicity and sexual orientation.

The UNPD, located in San José, is the United Nations’ global network advocating for change and connecting countries to knowledge, experience and resources to help people build a better life. 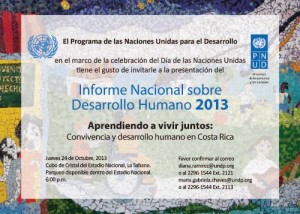 The UNPD is holding a presentation of the report tonight at 6:00pm in the atrium of the Estadio Nacional (National Stadium). Click here for your invitation.

The HDI represents a push for a broader definition of well-being and provides a composite measure of three basic dimensions of human development: health, education and income. Between 1980 and 2012 Costa Rica’s HDI rose by 0.7% annually from 0.621 to 0.773 today, which gives the country a rank of 62 out of 187 countries with comparable data.

The HDI of Latin America and the Caribbean as a region increased from 0.574 in 1980 to 0.741 today, placing Costa Rica above the regional average.

The HDI trends tell an important story both at the national and regional level and highlight the very large gaps in well-being and life chances that continue to divide our interconnected world.