Colombia kidnappings down 92% since 2000, police say 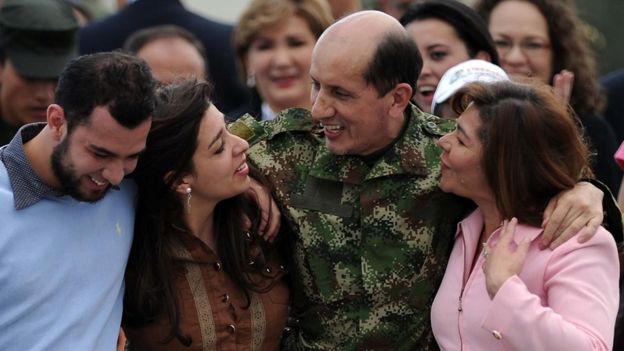 (TODAY COLOMBIA) Police in Colombia say the number of people kidnapped has fallen 92% since 2000. The head of the counter-kidnapping police force, Fernando Murillo, said 188 people had been abducted in 2016.

Colombia was for years the world’s kidnapping hotspot with human rights groups estimating that almost 33,000 people have been seized since 1970.

A peace deal with Colombia’s main rebel group and improved security have led to the “historic shift”, police said.

Gen Murillo said that the Revolutionary Armed Forces of Colombia (Farc) had not kidnapped a single person in 2016.

The Farc signed a peace deal with the government in November ending 52 years of armed conflict.

The rebel group had been notorious for kidnapping soldiers and police officers and holding them hostage for long stretches of time, sometimes tied to trees in their jungle camps.

The Farc also carried out large-scale kidnappings of civilians for ransom, dubbed “miraculous fishing expeditions”, stopping buses and seizing anyone they thought could be a lucrative target.

Gen Murillo said 88% of the kidnappings in 2016 had been committed by “common criminals” who did not belong to either the Farc or Colombia’s second-largest rebel group, the National Liberation Army (ELN).

Of the remainder, 11% were carried out by organised crime gangs, the general said, and the final 1% of victims were taken by the ELN.

The ELN has clashed with the government over its unwillingness to release the last of its hostages.

The Marxist rebel group was due to start exploratory peace talks with the government in October, but the meeting was cancelled after the ELN refused to free former Congressman Odin Sanchez ahead of the talks.

The rebel group says it will release him during the first round of talks but the government insists he should be freed before the two sides sit down at the negotiating table.

Mexico has replaced Colombia as the country with the highest number of abductions in the Americas as criminal gangs increasingly turn to kidnapping for ransom.

The Mexican government says there are about 1,000 kidnappings a year, but a survey by the National Institute of Statistics and Geography suggests the number for 2015 is closer to 64,500.