Colombia Votes: The Difference Between War and Peace?

When Colombian voters go to the polls today they’ll be choosing between two distinct approaches to ending the country’s half century of internal conflict. 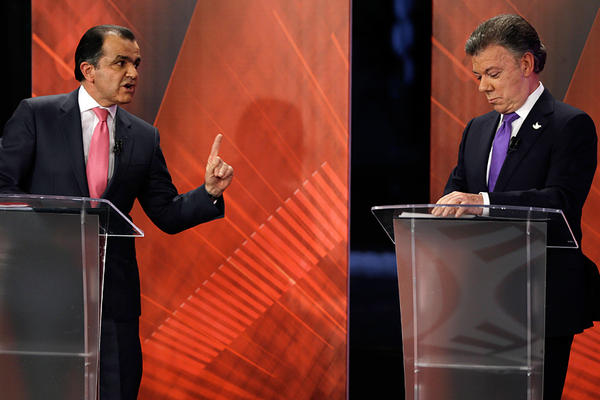 Mr. Uribe is credited with weakening the guerrillas through hard line security policies, and he and Mr. Zuluaga have both been sharply critical of the peace talks. They say the FARC are a “terrorist threat” that should be fought militarily. Though Zuluaga has backed away from his earlier threats to end the talks if he wins the election, he says he would impose conditions on the peace process. These include things like a unilateral cessation of hostilities, which the FARC would likely find hard to accept.

In one televised debate the candidates clashed over the issue of peace. “You want to continue this war. I want to end it,” Mr. Santos told Zuluaga. Zuluaga retorted, “After four years [in office] all you’ve done is sit down to negotiate with terrorists.”

Despite the jabs, James Lockhart-Smith, Head of Latin America at Maplecroft, a risk consultant, says Zuluaga would likely try to see the process through. However, mistrust between the two sides in the negotiations would mean a higher chance that they will fail.

Since starting talks in November 2012, FARC and government negotiators have reached partial deals on three of five points on the peace agenda: agricultural reform, the FARC’s future political participation, and dismantling illegal drug trafficking. They began tackling the issue of reparations for conflict victims last week.

“Peace talks under Zuluaga would … be at greater risk of failure, threatening a short-term spike in operational security risks and exacting a substantial opportunity cost in the longer term,” in the form of another 5 or 10 years of war, Mr. Lockhart-Smith says.

Zuluaga won the most votes among a field of five candidates in the first round of the elections in May, with Santos coming in second.  Neither won more than 50 percent of the vote, forcing a runoff.  Most leftist and independent political movements who fielded their own candidates in the first round have sided with Santos, while Zuluaga has consolidated the support of a portion of the Conservative party and retired military officers.

Polls now show the two candidates in a virtual tie, and the outcome of the vote is anything but certain.

In an attempt to tip the balance, both candidates have pulled out all the stops in the final days of campaigning.

Just five days before the election, the government announced that it started preliminary talks with the country’s second largest rebel group, the ELN, and that it has hopes to start parallel peace talks. Zuluaga’s campaign meanwhile has run a series of television ads where the candidate makes concrete promises, such as a 15 percent increase in conditional cash transfers to poor families.

The campaign has been so polarizing that analysts say the winner on Sunday will be faced with the difficult task of working amid stiff opposition. Political analyst Fernando Giraldo says, “Whoever wins, I think the country will be left completely fractured.”