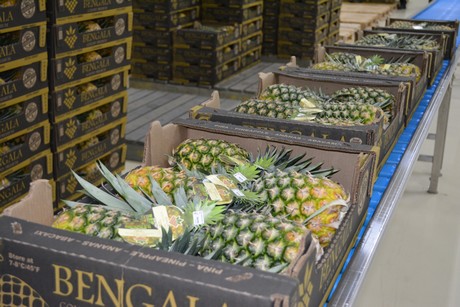 (Q24N) “We experience a tremendous growth each year. In 2014 we produced 6 million kilos of pineapples, which we increased to 13 million in 2015,” starts Mauricio Lopez, from Bengala Agricola, Colombia. “We expect to continue growing and we will expand our production area. The expectations for this year and 2017 are 20 million and 25 million respectively.”

Mauricio Lopez explains that their pineapple business started in the year 2012. “We imported seeds from Costa Rica in March 2012 and started the plantation in august that same year. The first harvest wasn’t till November 2013 and we started exporting in December 2015. We expect to export 700 containers in total this year.”

Bengala Agricola is more than just pineapples. “We also have production of, for example, three varieties of mango and avocados. However, we made it a priority to develop the pineapple business first. Nowadays, it’s an independent organization within the company, so we can start expanding plantations and include other fruits as well.”

“We are the leader in producing and exporting Colombian pineapples. One of our big advantages we have established is the high productivity level. We produce about 130 tons per hectare, which is more compared to the output per hectare of Costa Rica. Besides this advantage, we can also produce our fruits under better weather conditions. Our production isn’t organic, we apply fewer pesticides than Costa Rica to obtain a less contaminated product, continues Mauricio.

According to Mauricio, they stimulate the local economy of Colombia. “We create new work opportunities. We need 1 person per hectare of production. As I already explained our production is quickly growing and therefore, we need more people working in the fields. This gives the possibility to Colombian people to receive a normal income.”

Bengala Agricola is ready to start exporting to the European market. “We have the certifications that are needed. We are in the process of obtaining the Global Gap certification and we have BPA and BASC. Moreover, at the end of the year, we will apply for the fairtrade certificate. We already established export markets such as Milan – Italy, Rotterdam – The Netherlands, Chile, and the Caribe.”

Mauricio concludes, “I expect that we end this year with 1000 hectares of production. Our brand is Bengala Golden Premium in the national and international market. Our purpose is the offer an optimum quality product. A product that has characteristics such as flavor, texture and fragrance. We give the international market a new alternative.”