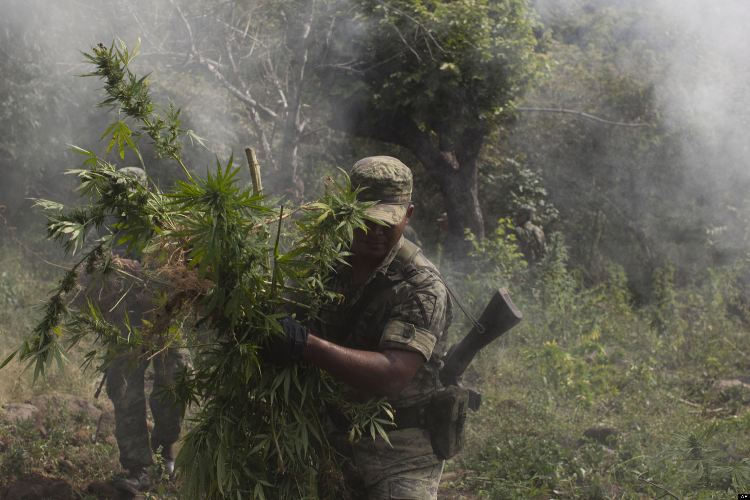 TODAY COLOMBIA – Colombian President Juan Manuel Santos says the War on Drugs has failed and we need a new approach to drug trafficking.

In an interview on Monday with The Wall Street Journal, Santos noted a softening of hard-line anti-drug policies both in the United States and in Latin America. He said the world had to develop more “realistic and pragmatic” ways to fight drug trafficking.

“How do I explain to a peasant in Colombia that I have to put him in prison for growing marijuana when in Colorado or in Washington state, it’s legal to buy the same marijuana?” he said. “The world needs a more effective, fresher, more creative focus to win this war, because until now we haven’t won, and the cost has been enormous.”

“We have arguably been the most successful country in learning how to dismantle these organizations, so we speak with a certain moral authority on this,” he said.

But Colombian busts seem on the rise. Here are a few, just from the end of March and April, 2014:

At the airport this week, Colombian police arrested 8 individuals for smuggling 114 kilos. Those arrested included an Indonesian man, a Dutch man, a Mexican woman, a Dominican woman and a Venezuelan man. The drugs were headed to the U.S. and Europe.

The U.S. of course, has been helping Colombia in its effort to eradicate drug trafficking. Tumaco has Colombia’s highest concentration of cultivation of coca, the plant from which cocaine is extracted. The border state of Narino, where Tumaco is located, harbors 26,500 acres of coca, more than any other area, according to 2013 figures from the United Nations, this despite a 38 percent decrease in acreage over the previous year.

Over the past decade, the U.S. has provided $3.5 billion in military and financial assistance to Colombia in its efforts to combat the FARC and end the cultivation of coca.

There are also recent huge seizures neighboring countries. And in Puerto Rico on April 3, 1.8 tons were seized and federal officials there said 3 tons had been seized in the last month alone.

What happened to Mexico being the ruler of the cocaine-transporting universe? The great majority of cocaine destined for the U.S. market is smuggled via Mexico, but U.S. officials have said that joint U.S.-Mexican counter-drug efforts have begun to push some of the traffic back into the Caribbean.

30 years ago the U.S. closed trafficking routes to South Florida. That didn’t end the drugs coming in, it just shifted the routes to Mexico, giving rise to the Mexico cartels and the violence associated with them.

Now, as the U.S. gains on the Mexican cartels, the drug routes just shift back. What never changes: The drugs come in, one way or another.

It doesn’t seem to me that President Santos has the answer any more than the U.S. At least he’s willing to consider options. Maybe he could tune in to El Capo 3 and consider El Capo’s solution for ending the cartels and drug trafficking: Flood the streets with free cocaine while increasing funding for drug treatment and prevention efforts. The cartels will go out of business and over the course of a few years, just as with cigarettes, the public can be educated as to the health dangers of drug use. It’s even free to watch: 8 pm (MT) Monday to Friday on MundoFox.

Tonight, El Capo and three of his associates are still being held captive in Colombia by a guerrilla group which plans to kill them. El Capo has been arguing with the Comandante about the group’s involvement in drug trafficking to support its rebel ideas. Undoubtedly, El Capo will be freed, to finish his mission of morphing from the world’s largest drug trafficker to ridding the world of drug trafficking.

Like Santos, the show’s creators are trying to bring home the point that the War on Drugs has been a failure and it is time for a new approach. I haven’t seen a new approach from Santos (or that the U.S. is softening its position as the WSJ says)– maybe it’s time to give El Capo’s theory a chance.

QCOSTARICA - If you are out and about this...
Panama