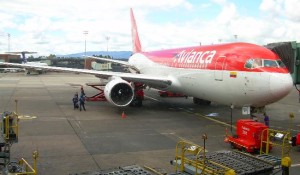 Around 1,000 pilots are demanding a 15% pay increase from the airline controlled by Avianca Holdings, which also controls El Salvador’s Taca.

Avianca’s flights to and from Costa Rica are not affected as  Taca pilots* are not involved in the dispute.

On October  2012, it was reported in a press conference that the trade name TACA Airlines was going to disappear from the public eye and the promotion and marketing strategies were going to be owned by Avianca, according to representatives of the group that controls the brand. The use of the single brand for the group occurred on May 28, 2013.

Prior to dropping the TACA brand, the Avianca-Taca Holding group downgraded the Juan Santamaría International Airport Hub in San José, Costa Rica to a base of operations following a company restructuring due to the merger. This includes the discontinuation of more than five non-stop flights made by the airline to and from San José, including flights to all cities in the United States. As consequence, more than 200 employees lost their jobs (equivalent to 20% of the work force of the airline). This has led to a controversy in Costa Rica, and an extensive investigation by the civil aviation authorities of that country against the holding company, which is actually in progress.

* Out of the five airlines that made up the original TACA alliance, Lacsa – he national airline of Costa Rica – is the only airline of the group that still operates international flights with its own IATA code (LR) and flight numbers.  As a subsidiary of Grupo TACA, the airline is also known as TACA/LACSA. Since May 2013 Lacsa is owned by Avianca which bought Grupo TACA.

With notes from Today Colombia

TODAY NICARAGUA – The Nicaraguan government assures that the imprisoned political opponents detained on charges of “inciting foreign intervention” are “usurpers” financed by the...
Cine (Movies)