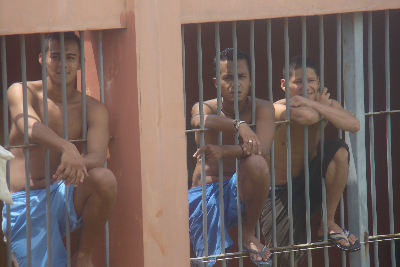 COSTA RICA NEWS – The Minister of Justice, Cristina Ramirez, has been ordered by the Constitutional Court (Sala IV) to directly intervene in the nation’s largest and most modern penitentiary, La Reforma, to investigate complaints of abuse by prison guards.

The Court noted that its judges have received 30 complaints in a short time of physical blows and other mistreatment by custodians of prisoners. As its name implies, having to do with “reforming” criminal conduct, the Costa Rican system is set up on a much different philosophy.

However, overpopulation and critically low budgets of the Justice Ministry (the government entity in charge of prisons) incarceration has come to mean a mere “warehousing” of criminals. Although some are trained in useful employment jobs, lack of staff prevents individualizing of rehabilitation.

Along with the order for Ramirez to take a hand in investigating these complaints she was also instructed the Minister to check out the inmates’ physical states. She must accomplish all this, including a remedial plan, in three months.

She must report to the national mechanism of the United Nations anti-torture body as well as to the Omsbudsman’s office. Wednesday, Ramirez said she would study a detailed order from the panel of judges to see how she should proceed.

One of the most noted cases of violence in La Reforma happened three years ago when an inmate, Johel Araya, was found dead in his cell. Ten guards were accused and convicted of murder. But this week, prosecutors said that their case against the guards was seriously flawed and apologized to them on their release.

Alajuela prosectuor Edwin Retana said that the exact time of Araya’s death could not be established. Retana said the conviction was based on inconsistencies between the defendants’ testimony and documented evidence but doubts remain about the guards’ guilt.

The reopening of the case and subsequent apology by the prosecutors is an unusual happening in this country.

QCOSTARICA - Starting this Friday, and for 10 days,...
Nicaragua