Two kinds of contraband are crossing the border from Nicaragua — one is new (smuggled medicines) and the other is as old as Bat Masterson or Wyatt Earp (stolen cattle.) 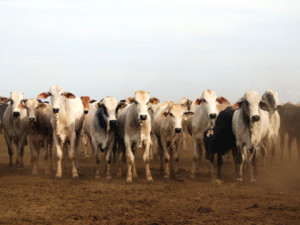 Medicines are cheap in Nicaragua, so smugglers can make a nice profit selling them in Costa Rica — especially if they don’t pay import duties. And Border Police have confiscated 188 head of cattle driven over the border.

Just in the first quarter of this year, police have confiscated nine times the amount of medicines they nabbed in all of last year. For the past three years this illicit traffic has been brisk but growing tremendously.

The range of captured medicines is bewilderingly broad — prescription antibiotics, analgesics, macrobiotic or alternative medicine, anabolics and even energy medication.

But the danger is not just fiscal (tax evasion). These medicines do not come with any purity guarantees such as the customer of a legitimate pharmacy has come to expect.

Freddy Guillen, chief of border patrol operations, told La Nacion, “A lot of this medicine is macrobiotic or alternative and went through no studies for effectiveness. Others may come from recognized pharmaceutical houses but in transit to this country could have been adulterated and be useless.”

La Nacion pointed out that in five years there has been a 180 degree shift in this smuggling — once Costa Rica “exported” smuggled medicines to fulfill a scarcity in Nicaragua. But the imbalance in prices has turned the traffic on its head.

In 2008, pointed out the paper, it was not rare to see local Social Security prescription medicine sold in southern Nicaragua. Today, Nicaraguan medicines are found for sale in local city parks, clandestine stores and — suspects the Druggist Association here — even in licensed pharmacies.

Many of this illegal products enter in the baggage compartments of buses and, since the market is not just along the border, this raises another danger. Some medicines should be refrigerated, but the long, slow trip causes deterioration.

Says Lorena Quiros, director of the Druggist Association, “They’re exposed to the direct sunlight and high temperatures for hours. This removes the security and effectiveness and can affect people’s health.”

Quiros worries that the traffic leaves the door open for falsification and high risks to people’s health. Let the buyer beware.

The paper reported that competition among various licensed drug stores is fierce, which leads to the temptation for some of them to cut corners in a price war. Thus, the contraband enters the legitimate market.

But there is nothing new about cattle rustling, as any farmer along the border with Nicaragua can attest. The herd of 188 head that was captured by police here last week carried several brands — including that of a Costa Rican ranch.

When surprised by Costa Rican border police, the illicit herd was being tended by four mounted men who, when police approached, promptly rode off into the sunset. At this writing, no farmers have come forward to claim their stolen cattle.

QCOSTARICA - The prestige of the company of some of the richest men in Costa Rica hangs by a thread. For many, the MECO...
Crime