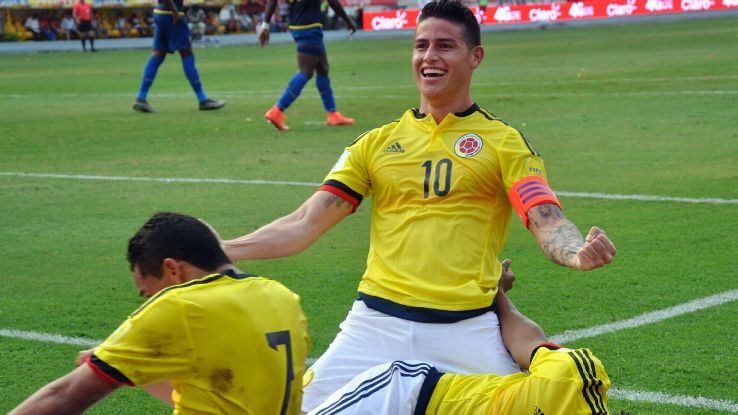 While 2015-16 was a tough year for James Rodriguez, his trademark swagger has returned when suiting up for Colombia.

The Copa America is set to kick off, with Colombia, Costa Rica, Paraguay and hosts the United States getting things underway.

Arguably the most difficult group of the four, each match in Group A should be tense and hotly contested. Following up on their dazzling display in Brazil at the 2014 World Cup, Colombia should be considered the favourite to win the group with James Rodriguez leading the way.

They will be joined by fellow CONMEBOL nation Paraguay, who performed well in the last two editions of the Copa America, reaching the final in 2011 and the semifinals last summer in Chile.

They will also be joined by CONCACAF’s Costa Rica and the host nation United States. Costa Rica’s remarkable era continues under new coach Oscar Ramirez, while Jurgen Klinsmann is in need of a positive display after a disastrous 2015 to placate a disgruntled U.S. fan base.

Without argument James Rodriguez is the key player for Colombia.

With rumors of a move this summer, including a potential transfer to Jose Mourinho’s Manchester United, James will be keen to spearhead Colombia in attack and show clubs around Europe that he is worth the substantial price tag. James has often mentioned how “supported” he feels when playing for Colombia, and there will certainly be no shortage of backing when they take the field on June 3 against the U.S. in Santa Clara.

Simply put, the Costa Ricans (Ticos) won’t be afraid of anyone, as was the case two years ago in Brazil. Joel Campbell is a handful for any defense. But without Keylor Navas, arguably the best goalkeeper at the Copa America, the expectations may not be met.

Colombia’s talent, combined with the experience and savvy of head coach Jose Pekerman, gives Los Cafeteros the edge in this competitive group. After a disappointing quarterfinal exit in penalties to Argentina at the 2015 Copa, Colombia will be eager to show that Brazil 2014 was not a one-off. Costa Rica and Paraguay will battle for the second spot, and when push comes to shove, the Central Americans will have enough to finish above the Guarani.

Perhaps it might have been different for Paraguay, but the unfortunate injury to key midfielder Nestor Ortigoza will see Ramon Diaz’s men on the outside looking in, as his absence will be felt both during the run of play and from the penalty spot. The play of the U.S. in the last 18 months does nothing to suggest that Jurgen Klinsmann’s men will advance. This will be a rough tournament for the hosts.

QCOSTARICA - In addition to the drop announced in...
Trends