German Health Minister Jens Spahn has urged individuals to get vaccinated as soon as they can, rather than risk suffering from COVID. Meanwhile, the death toll in India has risen above 250,000. Follow DW for the latest. 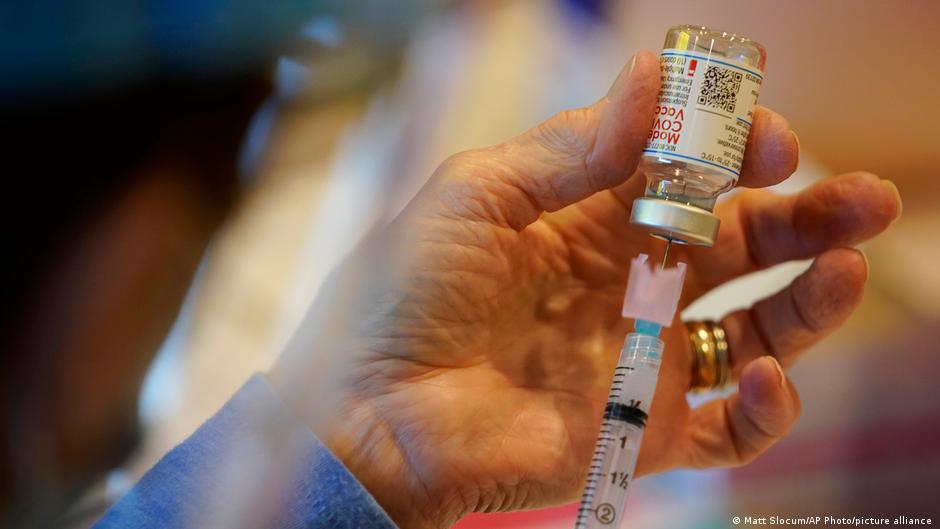 The German health minister, Jens Spahn, said that despite falling daily cases of the COVID-19 in Germany, caution is still needed.

“Everyone will experience this virus,” Spahn said at a press conference on Wednesday, adding that immunity would come either through vaccination or through illness. Both Spahn and the head of Germany’s Robert Koch Institute for infectious diseases, Lothar Weiler, stressed that vaccination was the better option.

The incidence of new infections is currently decreasing in all federal states and all age groups.

“Everything is going in the right direction, but we have to be very careful that confidence does not turn into overconfidence,” said Spahn.

Here’s a look at other coronavirus news from around the world.

The WHO said on Wednesday that the so-called Indian variant of coronavirus has now been detected in 44 countries in all six WHO regions. The UN health agency based its findings on 4,500 samples uploaded on an open-access database.

The variant, which is known as B.1.617, is believed to be one of several factors behind the massive outbreak in infections across India. Outside of India, the UK has reported the highest number of COVID cases caused by the Indian variant.

World leaders, and the World Health Organization, could have done more to lessen the deadly effects of the coronavirus pandemic, according to a report issued at the request of the WHO by the Independent Panel for Pandemic Preparedness and Response.

“It is totally unacceptable to live in the world, in which developed countries can vaccinate most of its population, while many developing countries have not access to one single dose,” said Guterres after meeting with Russian foreign minister Sergei Lavrov.

He warned that a lack of vaccinations would cause new variants and mutations to spread “like wildfire” in different parts of the underprivileged world.

India saw a record number of people killed by the coronavirus in the past 24 hours, pushing its death toll over 250,000. Deaths from COVID-19 swelled by 4,205, while daily coronavirus cases rose 348,421, with India’s overall number of cases surging past 23 million, according to the Indian Health Ministry. About one-third of reported new coronavirus infections worldwide occur in India.

Taiwan is planning to raise its alert level for COVID-19 in the coming days, the country’s health minister, Chen Shih-chung, announced on Wednesday. Raising the alert level would mean Taiwan closes shops selling nonessential items and limit gatherings to just 10 people outdoors and five people indoors. Chen said a decision could be expected in the “coming days.” The island has, so far, been spared the worst effects of the pandemic.

The pacific nation of Nauru said that it had achieved a “world record” by giving all its adult population the first jab of the COVID-19 vaccine. Nauru, which is one of the few places in the world to be free from COVID-19, said that 7,392 people — including foreigners — had received the first dose. The country has administered the AstraZeneca jab, which it received as part of the global Covax program.

“The National Coronavirus Taskforce is extremely pleased with this world record result and thanks everyone on Nauru for playing their part to keep Nauru COVID free and safe,” the government said in a statement.

However, Kieren Keke, the task force chairman, said that Nauru would continue testing all people arriving to the island country to prevent any spread of infection.

Germany provided more than 1 million COVID-19 doses on Tuesday, the third time that Germany broke the daily million-dose mark. Over 265,000 people became fully vaccinated as well, the most of any day since the immunization campaign began in December. Due to the latest push, more than 10% of Germans are now fully vaccinated.

Norway Prime Minister Erna Solberg said the country will drop the AstraZeneca vaccine from its immunization program due to rare, but serious side effects, including blood clots. The Johnson & Johnson vaccine will be available to willing volunteers in the country.

The UEFA Champions League Final will be played in Porto, Portugal instead of its original setting, Istanbul, Turkey.

The UK, where both Manchester City and Chelsea are located, placed Turkey on its travel “red list” last week, effectively making a trip to the country impossible. Portugal was on the “green list,” which allows residents to travel back from the country without quarantining after a negative COVID-19 test.

The announcement comes after Portugal said it would allow soccer stadiums to be filled at 10% capacity for the last round of matches in its top-division season.

The European Commission is pushing for stricter restrictions on travelers arriving from India.

The EU executive told all member states that travel should be restricted to curb the spread of the B.1.617.2 virus variant. EU citizens, long-term residents, as well as their family members would be exempt. Otherwise, only people with compelling reasons, including family matters and humanitarian reasons, should be allowed to enter.

Some EU countries, including Germany, have already implemented restrictions on arrivals from India.

Bolivia signed a deal to buy 15 million doses of the Johnson & Johnson COVID-19 vaccine on Tuesday, stipulating that Biolyse Pharma, a Canadian company, would make the jabs and the World Trade Organization would have to waive the vaccine’s patent.

Bolivia’s government said that it had applied to the WTO to waive the patent.

Benjamin Blanco, a Bolivian trade official, said that the clause would help the country speed up vaccinations. Currently, Bolivia has managed to vaccinate just 10% of its population, that too with a single jab.

The drug, if manufactured domestically, could cost about $3 to $4 a dose. Blanco said that if the patent waiver is granted, then production could begin in three to six months.

Peru’s Health Ministry said on Tuesday that it is investigating a case in which nurses tried to vaccinate patients against COVID with empty syringes. The ministry said it had noted at least three cases in the country’s capital.

Arturo Granados, the spokesman for the health ministry, said the results of the investigation would be revealed on Thursday.

The scandal comes at a time when Peru is struggling with vaccinating its population. Several wealthy Peruvians are known to have headed to the US to receive vaccinations.

Brazil has suspended use of AstraZeneca’s COVID jab in pregnant women following the death of a pregnant woman in Rio de Janeiro after taking the vaccine. The expectant mother suffered a hemorrhagic stroke.

Meanwhile, Anvisa — Brazil’s health regulator — issued a warning about the use of the COVID shot among pregnant women. The regulator added that it had not been informed of any other side effects of the vaccine in pregnant women.

“The serious adverse event of a hemorrhagic stroke was assessed as possibly related to the use of the vaccine given to the pregnant woman,” said Anvisa. AstraZeneca has said that pregnant and breastfeeding women had been excluded from clinical trials of its COVID-19 vaccine.

Ontario, Canada’s most populous province, has suspended use of the AstraZeneca COVID-19 vaccine as a first dose. The province cited new data showcasing increased risks of blood clotting.

“This decision was made out of an abundance of caution due to an observed increase in the rare blood clotting condition, known as vaccine-induced immune thrombotic thrombocytopenia, linked to the AstraZeneca vaccine,” said David Williams, chief medical officer of health of Ontario province.

Ontario’s decision follows a similar move by Alberta, another Canadian province, to stop administering the vaccine.

Ontario has administered more than 650,000 doses of the AstraZeneca vaccine. Recipients include Prime Minister Justin Trudeau and his wife. At least 12 clotting cases have been reported in Canada after administering the AstraZeneca jab.

QCOSTARICA -Starting this Tuesday afternoon and evening, an increase...
Infrastructure