Coronavirus genome in Costa Rica: came from the USA, Germany and Brazil

Analyses carried out with six samples taken from patients in Costa Rica showed that the genetics of this virus is the same as that found in those countries.

Analyses carried out with six samples taken from patients in Costa Rica showed that the genetics of this virus is the same as that found in those countries.

The new coronavirus that circulates in Costa Rica does not have the same genome as that found in China, the country where it originated. Its composition indicates rather that it comes from the United States and other clusters that have fallen in other countries, such as Germany or Brazil.

This information is already published on the page nextstrain.org, which collects the phylogeny (origin, evolution and development of a virus) of the different organisms. By Thursday afternoon, 4,147 sequences from different parts of the world had been placed on the platform.

The information on the virus in the country emerged from the analysis of six samples taken from Costa Rican patients: five men and one woman; three from Alajuela, one from Cartago, one from Heredia and one from San José. 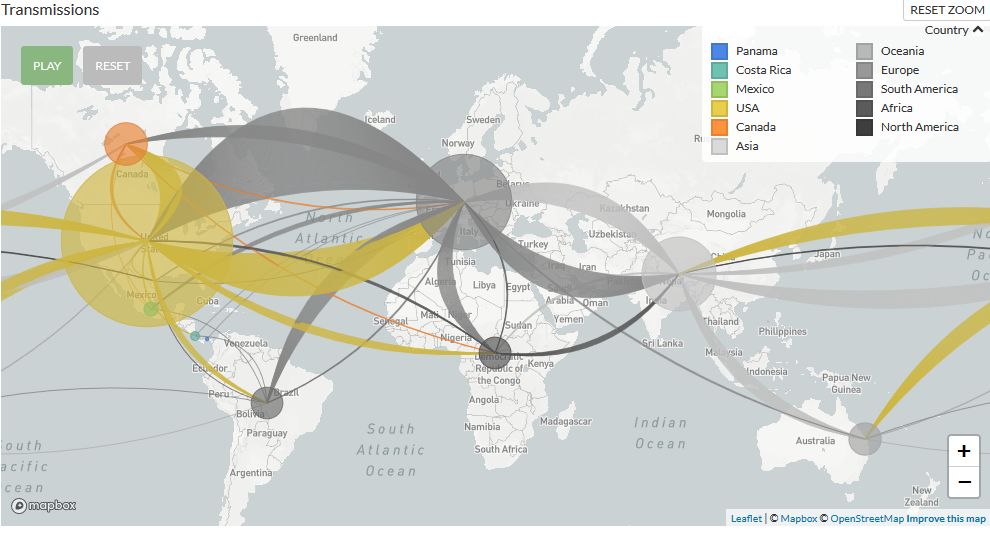 The work was carried out by the Costa Rican Institute for Research and Teaching in Nutrition and Health –  Instituto Costarricense de Investigación y Enseñanza en Nutrición y Salud (Inciensa), attached to the Ministry of Health.

The results released at a press conference Thursday afternoon are only initial data, as Costa Rica prepares a further analysis of the virus genome.

“For some years, Inciensa has used techniques to see at the DNA level what the characteristics of these microorganisms are and we were able to isolate the genetic molecule and sequence it,” said Francisco Duarte, director of genomics at Incense, one of the scientists in charge of the project.

“This allows us to use that information to know and relate viruses, where they are from, if patients share similar viruses, if cases are related, it helps us with the diagnosis,” he added.

According to Health Minister Daniel Salas, this is the first time that a virus has been sequenced. It had previously been done with bacteria.

“The idea is to do it consistently, these are just the first cases,” said the Minister.

In fact, there are only six cases of 719 patients (as of today) that the country has registered and they are only representative of the Central Valley, so the investigation must increase in quantity and variety to see how the genetic variability of the virus behaves in the country.

Continuing sequencing is necessary because the virus that causes this disease has a constant mutation. These changes are not so dramatic that thousands of different vaccines (possibly two, one per strain defined so far) are needed or that they become ineffective in a very short time.

This new virus does not mutate as fast as influenza or HIV viruses. A report from the University of Edinburgh in the journal Science explains that SARS-CoV-2 mutates two to four times slower than influenza.

Not all covid-19 causing viruses are genetically identical, knowing which one or which circulates in Costa Rica is very useful for future vaccines or very specific treatments.

The genome tells us all the highly detailed “fingerprint” of the virus and this will allow us to make better decisions.

Allan Orozco, director of the Central American Bioinformatics Network and member of the Council of Clinical Bioinformatics of the Ministry of Health, makes an analogy that it is about translating a book in an unknown language to be able to read it.

“The new coronavirus has a curved chain-shaped book and is made up of 30,000 letters that define its genetic material. This string is made up of a combination of the following characters: A, C, G, U. This text has a length of about seven letter-size pages with 10 single-spaced courier letters. We must read that book to know the genome, “said the bioinformatician.

And he added: “but current devices cannot read the entire genome, they can read fractional parts and go little by little. They read little pieces, like puzzle pieces, and then they have to be built. Once the puzzle is assembled, you can read the book. ”

Why is this important? The information obtained allows, for example, to make decisions at the level of public health policies.

Previous articleThe other side of reality!
Next articleOIJ Divers Search Cachi Dam Lake For Allison Bonilla

QCOSTARICA - The government will present a bill to the Legislative...
Read more
- paying the bills -