(QCOSTARICA) This Thursday, June 4, the curve of cases of covid-19 again peaks with 37 new infections over the previous day.

With that figure, the number of people affected since March 6 reaches 1,194, reported Health Minister Daniel Salas at the daily news conference.

Of the total number of infections, 940 are Costa Ricans and 254 foreigners. 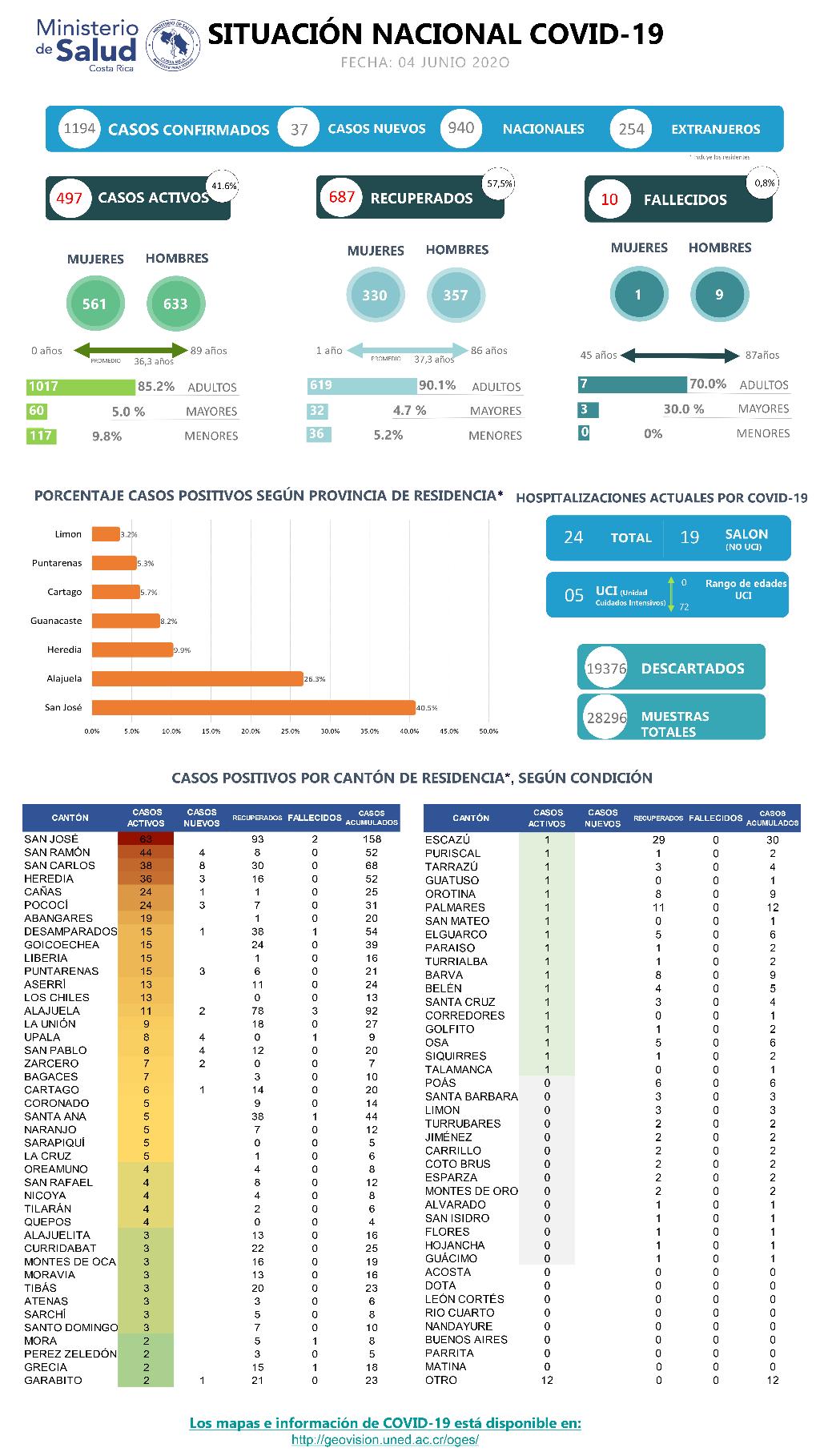 Currently hospitalized are 24 people, of which 5 are in the ICU.

The new figures prompted the Ministry of Health to add more districts to the extended localized restrictions effective on June 5.

The extended localized restrictions include total vehicular restrictions from 5:00 pm to 5:00 am, save for exemptions we already know.

Roads exempted from the above, but maintaining the national restrictions are:

The president recognized this Thursday the work of the Clodomiro Picado Institute of the University of Costa Rica (ICP-UCR), which together with the CCSS carries out the development of treatments to combat covid-19 through the use of plasma from recovered people and plasma of horses.

On Thursday, President Carlos Alvarado joined the press conference after being absent for more than a week.

The President said that according to the Costa Rican Social Security Fund (CCSS), the recovered plasma has been applied to four sick patients. and of those, a woman recovered and was discharged.

“We are conservative in saying so, but the results indicate that they are positive and progress is being made in the next stages of that strategy,” said Alvarado.

The other project is from the plasma applied in horses, from which a synthesized is generated, that is progressing quickly and safely.

“This is innovative research worldwide, that is, very few countries are exploring this route, but it is very promising. We call on them to join in supporting the Institute,” added Alvarado.

QCOSTARICA - Of the 410,000 people with inquiries related to the...
Read more

QCOSTARICA - Of the 410,000 people with inquiries related to the new coronavirus at the medical centers of the Costa Rican Social Security Fund...
Health

QCOSTARICA - Last month, the Central Government announced that the reopening of public areas such as parks would remain in the hands of each...
Politics

QCOSTARICA - The second attempt at dialogue by the Executive Power to define the route to follow in search of a solution to the...
Dollar Exchange

QCOSTARICA - The dollar exchange rate against the colon fulfilled two weeks of stability this Monday, after several weeks of increases. The exchange closed this...
News

Legislators approve elimination of annuities for the next two years

QCOSTARICA - The Legislative Assembly approved this Monday, in a second and final debate, a bill that will eliminate annuities for the next two...