Coronavirus in Nicaragua: Parties in Masaya amid the pandemic 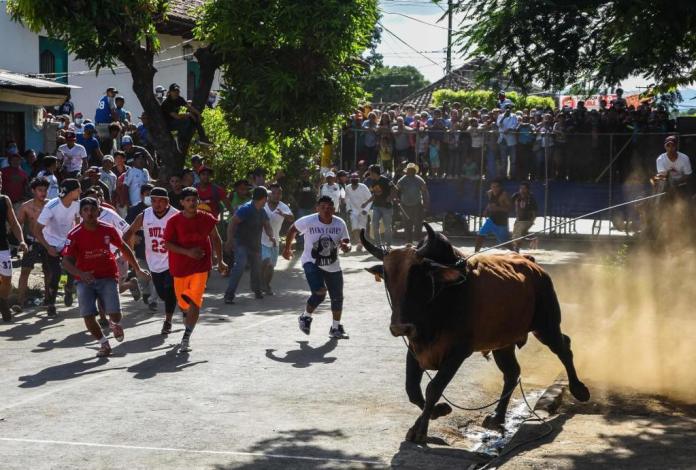 TODAY NICARAGUA – Have Nicaraguans found a way to beat cure COVID-19? Thousands in the city of Masaya, Nicaragua, famous for its indigenous roots, rebellion and folklore, celebrated the patron saint festivities of San Jerónimo, the patron saint of Masaya, without fear of the coronavirus pandemic.

“The San Jerónimo Festivals are the biggest in Nicaragua” with many “Folkloric expressions in dance, street theater, music, their traditional meals”, explained Culture sponsor Wilmor López.

During these celebrations, which last several days, the faithful offer penances for the favors they hope the saint will grant them, which according to popular belief can cure many diseases and attracts thousands of believers.

Through the streets of Masaya, a city of more than 100,000 residents some 30 km south of Managua, the most devout took part on Tuesday “Tope de Toros”. They hunted and braved the beasts while calling on them with explosives, in front of the thousands of worshipers who attended the show under the strong sun and then drizzle.

The Masaya celebrations include horse parades, folk dances and the festival of the “Agüizoten”, during which its inhabitants revive myths and legends of terror.

The dance of the “Torovenado” performed during these celebrations is a satire “in defense of the Spanish overwhelming”, emphasizes López.regarding indigenous resistance to the conqueror.

“The elegance of the black dance”, another representation, is “like the banner of folklore that culturally identifies us,” he says.

Unlike other countries in the region, Nicaragua has not declared a quarantine and restrictive measures are still being taken to curb the spread of the coronavirus. On the contrary, the government of President Daniel Ortega has promoted numerous sports and leisure activities and sparked international criticism.

According to official information, the Nicaragua Ministry of Health (MINSA) has registered 5,170 infections with the new coronavirus since March, and 151 deceased.

However, the independent Observatorio Ciudadano (Citizen Observatory), made up of municipal and medical networks, registers 10,396 suspected Covid-19 cases and 2,735 deaths.

The other Central American countries have started to resume their activities. but they maintain some restrictions.