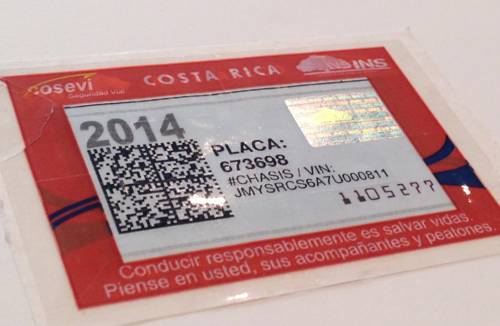 The cost of the 2014 Marchamo for passenger vehicles will cost an additional ¢3.500 colones this year, the Instituto Nacional de Seguros (INS) – state insurer – announced on Monday.

For the most part the total amount of the basic insurance portion of the the annual ciruclation permit or Marchamo is ¢20.856 colones – ¢3.482 or 20% over last year – for passenger vehicles.  Charges for light and heavy trucks, a well as special vehicles, vary depending on the type/use of the vehicle. Motorcyclists pay the highest insurance portion.

But, when you add in all the extras, the biggest pill to swallow is the property tax.

The property tax is based on the year, make and model and its “valor fiscal” (tax value)  of the vehicle, which has no relation to the market value, the value that is bought or sold.

Thus, the newer and more expensive the vehicle, the higher the final cost of the marchamo.

The Marchamo is payable by December 31.

Starting on January 1, drivers with vehicles circulating without the Marchamo face a ¢47.000 colones fine, plus costs and interest tacked on for when they finally do pay it.