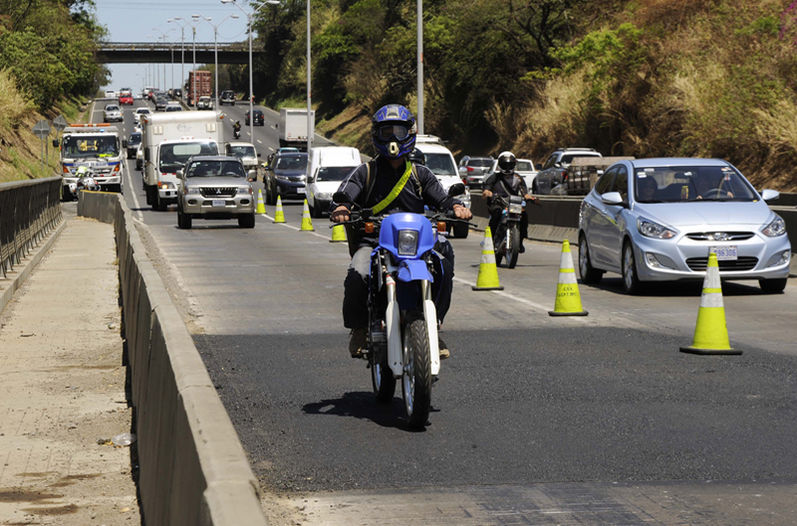 QCOSTARICA – The National Highway Council (Consejo Nacional de Vialidad – CONAVI) has, since 2008, invested more than US$13.1 million dollars in a number of repair works to the bridge over Virilla river, known as the “Platina”, on the autopista Genaral Cañas.

That amount is close to the US$15 million dollars that, according to the former minister of Transportation, Francisco Jimenez,  in August 2011 would cost to build a new bridge.

However, the project of construction a new bridge never materialized and the problems continue, such as the latest, on Sunday morning a metal plate coming loose on one of the Alajuela – San Jose bound lanes.

Since Sunday, traffic on the General Cañas – the busiest highway in the country – in the area of the Platina bridge, has been horrendous. Traffic police have been on site to control traffic and authorities are recommending alternate routes or shifting travel time.

The repairs to the bridge have been unsuccessful
Many ask, why was not a decision taken to build a new bridge? Mauricio Salom, director of the Conavi, says “I do not judge earlier decisions; I can only give an account of the decisions I am taking now (…). The circumstances at this time are specific; we have taking the courageous decision to expand to six lanes.”

The deputy minister of Transportation and Infrastructure, Mauricio González, says, “it’s easy to look back and realize the repairs did not work. What information was available at the time for the (repair) work, is something I do not know.”

While politicians and government officials continue with their rhetoric, one thing is certain: the bridge has been and continues to be a nightmare for drivers.

Tonight (Tuesday), starting at 10:00pm, the two lanes of Alajuela – San Jose direction will be completely closed until 5:00am Wednesday.

A statement to the press by the Ministerio de Obras Públicas y Transportes (MOPT) said work crews will be working to “permanently weld” the metal plate to the bridge deck.

“We are asking users to move at moderate speeds while transiting the bridge,” warns the MOPT statement.