Costa Rica and Panama Battle It Out

The CONCACAF region is now in its final phase of FIFA 2014 World Cup qualifying known as “The Hex”, to end the first set of matches two rising nations clash when Costa Rica travels to Panama City and Estadio Rommel Fernandez to take on the Panamanians. 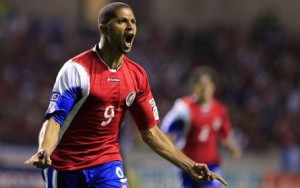 This match shapes up to be fairly intriguing, as both sides are led by focal points in the attack and play in a trademark Central American style however go about business in completely different styles.

The Costa Ricans under Coach Jorge Luis Pinto has a quite youthful squad with the core of the team in their early to mid 20’s and are highlighted by a versatile attack consisting of the free scoring forward Alvaro Saborio as well as captain Bryan Ruiz, Joel Campbell and Jairo Arrieta, the likes of Saborio and Arrieta as well as multifaceted midfielder Rodney Wallace and fullback Roy Miller might sound familiar as they all play within MLS.

The Panama squad under Coach Julio Dely Valdés plays a more defensive style, predicated on the strength, size and experience of forward Blas Perez and defender/captain Felipe Baloy. With Mexico and USA odds on favorites to grab two to the automatic qualifying places head to head matches between the other sides become vitally important with only one automatic qualifying birth and the playoff place up for grabs, both squad have promising futures to look forward to and being able to qualify for the 2014 World Cup would help their development significantly.

Q REPORTS - The former leader of the Soviet Union and 1990 Nobel Peace Prize winner, Mikhail Gorbachev, who has been self-isolating to protect...
Front Page

QCOSTARICA - The so-called Costa Rican space agency, recently approved by Congress, does not have to be a bureaucratic giant, with a large office...
Health

QCOSTARICA - From the start of the vaccination program against covid-19 on December 24, 2020, 193,273 doses have already been applied countrywide.   Of this total,...
National

QCOSTARICA - For their preparedness to face tsunamis, the communities of Tamarindo and Sámara were recognized by the Junta Nacional Tsunami Ready de Costa...
The Americas

Q REPORTS - Former US President Donald Trump's policy of maximum pressure on the Venezuelan dictatorship failed to dislodge the regime or alleviate the...
Employment

QCOSTARICA - The latest unemployment figures show that women have been affected the most during the pandemic: more than a quarter of the female...
Business

QCOSTARICA -Viatris, one of the largest generic drug manufacturers in the world, announced the opening of commercial operations in Costa Rica, with an initial...
Front Page

QCOSTARICA - Within a few months, the Juan Santamaría International Airport or San Jose airport (SJO), went from being “bustling” to becoming a practically...
Fashion & Beauty

Q MAGAZINE - Miss Costa Rica 2020, Ivonne Cerdas, will soon be traveling to Florida to represent the country in the Miss Universe pageant. After...