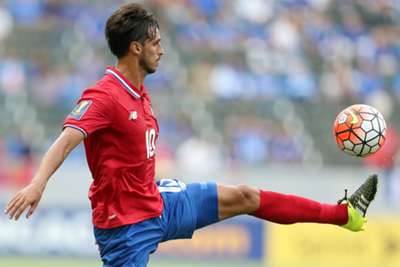 QCOSTARICA SPORTS – Bryan Ruiz’s first-half goal was the difference as Costa Rica stunned Uruguay 1-0 for an overdue win in an international friendly on Tuesday.

Costa Rica’s last victory came against Uruguay on penalties in November last year – a run of 10 matches without success – but captain Ruiz ended the Central Americans’ drought in San Jose.

Ruiz headed Costa Rica in front after eight minutes and the hosts never surrendered the lead as they won for the first time under Oscar Ramirez, who replaced Paulo Wanchope in August.

Costa Rica made a dream start to the match courtesy of Ruiz in the ninth minute.

Campbell curled a cross into the six-yard box and Ruiz rose highest to glance a header past Silva.

Costa Rica came close again on the half-hour mark, when Borges cut the ball back for Johan Venegas but the latter’s side-footed shot went just wide of the post.

At the other end, the post denied Uruguay an equalizer after Matias Corujo’s strike hit the base of the frame two minutes later.

Uruguay had another opportunity to draw level in the 38th minute, but after doing all of the hard work and rounding his opponent, Jonathan Rodriguez found the side netting.

Clear-cut chances were few and far between after the break, though Campbell’s low shot midway through the half flashed across goal, much to the relief of Silva.