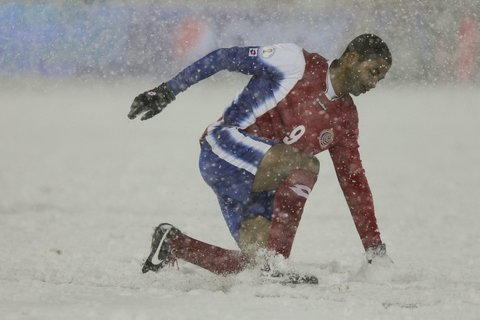 Soccer – futbol in Spanish – is not meant to be played in the snow. That is exactly what the Costa Rican team had to do Friday night, in a blizzard in fact, losing to the United States in World Cup qualifying.

“It was an embarrassment to soccer, disrespectful to the game,” Costa Rica coach Jorge Luis Pinto told reporters after the game, which was played at Dick’s Sporting Goods Park in Commerce City, Colorado.

According to Pinto, the “legal conditions” for playing the game were not in place.

Costa Rica players said the conditions made the match unplayable.

“Honestly, it was robbery, a disgrace, I’ve never played a game in these conditions. You couldn’t see the ball … if we had played without snow, we would have won, I am sure. We were robbed, I think. The whole world is going to commentate, ‘what is that game?’ The referees that we had today didn’t handle it properly. They cost us three points.”

“We couldn’t play in those conditions; they should have stopped the game in the first half.”

“They’re not playing conditions for playing soccer on. I would love to play in a field where the field was good.”

Coincidentally, on the other side of the pond, the qualifier between Northern Ireland and Russia in Belfast was postponed again on Saturday because of a snowstorm. The game was supposed to have been played Friday but was put off until Saturday because of the weather.

“The referee has just called the match off as ice is forming. There is no need for fans to come to Windsor Park to help,” the Irish Football Association said on Twitter.

Does Costa Rica have a point? Should the match have been played at all? Should it have been abandoned in the second half when the rate of snowfall appeared to increase?