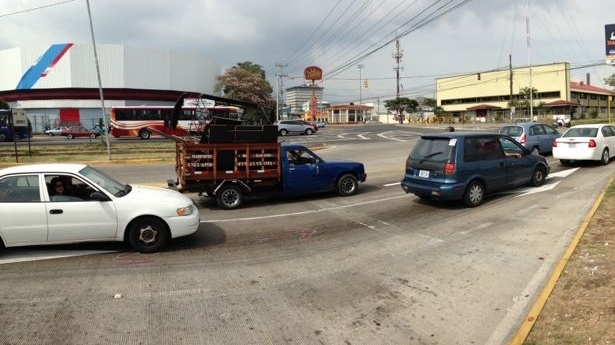 As of yesterday (Saturday) drivers eastbound on the old road to Sabana can no longer turn left at the Universal/McDonalds.

However, despite the signs drivers continue with the tradition of making a left, a habit hard to break. Eastbound traffic is now required to move straight, past the McDonalds and a left at the CNL/Yamuni to get onto Avendia 10.

The intersection was accident waiting to happen, and many accidents did happen. Drivers, in making a left turn, had to first cross the train tracks – many would actually stop on the tracks waiting for the lights ahead – and then figure out if the Ruta 27 eastbound traffic was coming to a stop.  Then there was the question of who had the right-of-way at the lights, straight ahead traffic or traffic onto Avenida 10.

For the time being, traffic officials are cautioning instead of ticketing, taking the opportunity to educate drivers on the change.

QCOSTARICA - In total, 19 cantons in six provinces maintain a high risk of contagion by COVID-19, according to the last update from the...
Business

QCOSTARICA - The elimination of the daytime sanitary vehicle restrictions in less than a week, given the drop in infections and hospitalizations due to...
National

QCOSTARICA - The disappearance of the taximeters (popularly known as "marías") will not be immediate despite the new mobile application that will manage services...
Economy

(BNamericas) - In order to strengthen the well-being of the population and the sustainable development of the country, Costa Rica has been incorporated a...
Trends

QCOSTARICA - Almost a million people aged 58 and over, throughout the country, are targeted by the Caja's health centers to be vaccinated against...
Infrastructure

QCOSTARICA - Driving the 50-kilometer concrete highway between Cañas-Liberia, inaugurated five years ago and already showing signs of deterioration, is now free of tolls. But...
Health