Patrick Hundley, a prominent Jaco Beach developer, has been accused of a US$7 million fraud by five foreign investors and was arrested Tuesday on charges filed by the Fiscalía de Puntarenas. 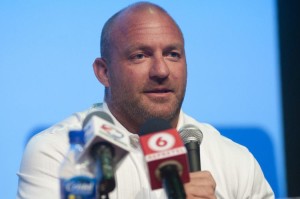 On Thursday the Juzgado Penal de Garabito de Puntarenas ordered Huntley to two months preventive detention (jail) while prosecutors continue with their investigation.  Two women who worked as notaries for Hundley were are also ordered to one month each to preventive detention.

The North American who has lived here for a dozen years allegedly sold a nearly 16,000 square metre lot in the town of Jaco that the investors say they never got. Hundley is known for tourism-related real estate projects.

The investors say they signed a contract to pay US$500,000 monthly for a year and a half after which the investors would become stockholders of Hundley’s corporation. The investors maintain that this last step never happened.

Hundley is known on the Pacific coast as a successful developer whose shrewd business sense brought into being Diamantes del Sol, The Pacific, Paloma Blanca, Bahia Azul, Bahia Encantada and The Palms.

In 2012, he announced that he would build a US$4.7 million stadium for the under-17 years women’s World Cup soccer tournament. He also became known because his CW Playco firm bought ¢15 million colones in National Liberation Party (PLN) bonds as a contribution to the 2010  election campaign.

La Nacion reported that the land in question in the fraud case is described in the National Registry as “a property of terraces with a building destined to be a restaurant.”

The land was obtained by Hundley’s Jaco Vista Mountain company in 2009. The fraud complaint is dated July 16, 2013, alleging that never were stocks turned over to the investors.

Moreover, they accuse Hundley of concealing that the property in question had an impediment attached, having to do with the Toronto, Calanda, divorce of the late previous owner.

The complaint accuses Hundley of fraudulent administration, a crime with a sentence of up to 10 years in prison. A hearing was scheduled for Wednesday.

The accusing entity also asks for a freeze on all Jaco Vista Mountain business accounts.