Costa Rica: Where Environmentalism and Tourism Live in Harmony 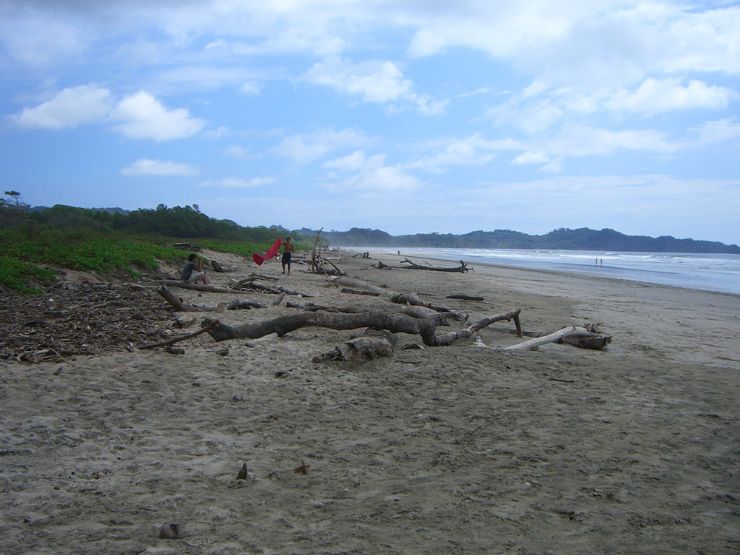 Standing on the seashore at Playa Guiones, on Costa Rica’s northwest Guanacaste shoreline, and taking a look eastward, all that one sees is an unbroken line of wooded area.

There are no high-rises, no big hotels, no smog-filled taxi corridors catering to drunken tourists. Instead the trees are filled with monkeys and birds with brightly colored plumes. The only sounds are the crashing of the ocean’s waves and the thrum of forest creatures.

Not all of Costa Rica looks like this, but a lot of it does. According to last year’s report from the World Energy Council on global environmental sustainability, Costa Rica nabbed second place, after Switzerland, and was far ahead of Central American neighbors such as Nicaragua, which came in 88th place, or the United States, which limped in at 87th. For a tiny country like Costa Rica, which has no standing army and is surrounded by nations that have been beset by war and poverty for decades, it’s a remarkable achievement. Even more impressive is that the government has found ways to make sustainability an economically viable process for a developing nation.

“The scientists here have a very good relationship with the government,” says Robin Sears, who directs academic programs at The School for Field Studies, which has an extensive sustainability program in Costa Rica. “They listen to scientists and other researchers. We have a relationship with the minister of environment and direct access to those guys, and they are open to and rely on the data and recommendations that we generate. The government is open to dialogue about how best to develop Costa Rica.”

Starting in the 1990s, Costa Rica began an aggressive plan to develop its tourism industry in tandem with long-term sustainable-development goals. It set aside fully 26 percent of its land mass for ecological preserves and began a process of building alternative sources of power. Today, roughly 94 percent of the country’s electricity comes from renewable sources such as hydroelectric and wind power. A culture of conservation is visible in even the smallest ways. The place where I’m staying, for instance, insists on composting biodegradable waste, like food, emphasizes conserving water, and has a recycling regimen. Some local restaurants have started offering all organic menus in the last month. Costa Rica’s president recently announced his goal to make Costa Rica the first “carbon neutral” country in the world by 2021.

For a country with a long and rich history as a cattle ranching society, it’s an ambitious goal. But already it appears to be bearing results. Earlier this year, a Costa Rican cattle farm, Tropical Agriculture Research and Higher Education Center (CATIE), became the first farm of its kind anywhere in Latin America to receive certification by the Sustainable Agriculture Network, part of the Rainforest Alliance, for its animal-treatment and sustainability practices.

Costa Rica isn’t without problems. While the area where I’m staying is rich in biodiversity and thin on high-end commercial development, there are parts of Costa Rica where the opposite is true. There is too much monoculture cultivation of bananas and pineapples, for instance, the latter of which saps soil of its nutrients. Farmers use too much pesticide, and the government hasn’t done enough to shore up clean water supplies and build the kind of infrastructure that keeps communities safe from rainy-season flooding. I met a young man, Rodrigo, who lives in the town of Nosara. Growing up, he told me, the nearby river flooded so badly and so often that he once found himself standing chest high in water in his downstairs kitchen.

Still, the country has made significant strides. Costa Rica is the size of West Virginia, and yet it recently announced a marine water sanctuary that will be bigger than Yellowstone National Park. In 1996 it established a program called the Payment for Environmental Services, which aimed to compensate farmers and landowners for being shepherds and stewards of the resources—water in particular—that the rest of the country depended on. Downstream users—farmers who need water, for instance—pay upstream owners to maintain and care for the rivers that course through both their worlds. Today, some 8,000 landowners responsible for roughly 10 percent of Costa Rica’s non-park landmass are participants in the PES program. While the program has been criticized by some for not benefitting the poor as much as had been hoped, it is widely praised for helping cultivate among Costa Ricans a sense that their communities and the land they all share are interdependent and connected—precisely the mindset that conservationists hope the rest of the world will adopt.

One creative NGO called Cedarena developed a bank card that rewards users with points for purchases. The accumulated points are then donated to a national biodiversity fund, which uses the monies raised to help pay for water protection in areas that the PES program cannot cover. It’s these kinds of programs, says the SFS’s Robin Sears, that have helped propel Costa Rica to the vanguard in practical sustainability solutions. “You find more base kinds of sustainably managed tourist enterprises and community-based enterprises there than in other countries,” she said.

For all its progress in environmental protection, Costa Rica, like many developing countries, grapples with how to balance policies that protect the environment with ones that will uplift thousands of struggling families. One NGO, the Association pro Culture, Education and Psychology for infants and adolescence (CEPIA) is trying to bridge the gap. Staff members provide after-school programs, psychological counseling, and professional training to thousands of kids and their families in the Guanacaste region. “They have done tremendous work with respect to addressing education and the health needs of the people of the Guanacaste region,” says James Cramer, who lived in Costa Rica for several years and now directs The School for Field Studies. “There’s not much pressure in rural areas to send kids to school, so they drop out, and girls drop out at an especially high rate. So CEPIA has been a major force for encouraging kids to stay in school.”

Article by By Scott Johnson | Takepart.com

QCOSTARICA - The goal of immunizing 500,000 people over...
Alajuela