By Joanne Blain, Postmedia News – On the secluded Costa Rican beach where I huddle with a couple of friends and half a dozen strangers, it’s pitch black except for some distant lightning and the luminescent crests of the waves breaking on shore. I’ve got a cramp in one leg and unseen insects are feasting on my bare ankles because I’ve forgotten to bring bug spray. 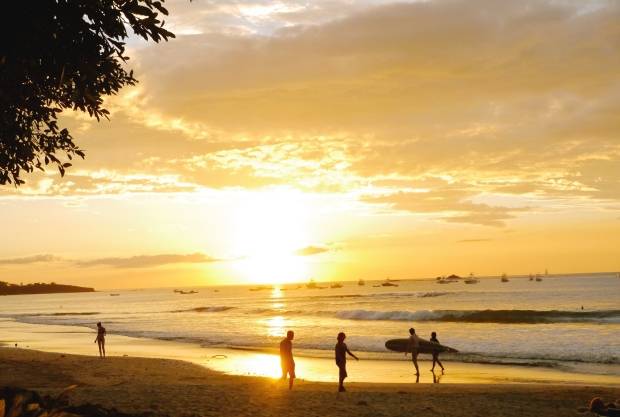 But I’m not budging because we’re told a giant Pacific green turtle, which our guides have been quietly watching in the brush behind us, is digging a nest in the sand and preparing to lay her eggs. Such a sight is fair exchange for a little discomfort and a few bug bites.

When the guides decide the turtle is intent on her task and we won’t risk spooking her back into the ocean, they lead us into the brush with infrared flashlights and we form a half-circle behind her. Her shell is as large as an ottoman. We talk in whispers as she rocks back and forth and flicks up sand with her broad flippers, creating a deep hole for her eggs.

Finally, the turtle stops moving. “It’s OK now, she is entranced,” one guide says as he digs with his hands to widen the top of the hole and then illuminates it with a regular flashlight. We take turns peering in and I see a glistening white egg, the size and shape of a billiard ball, drop onto a pile of others already in the hole.

No one is saying much of anything. Like the turtle, we’re entranced.

I didn’t anticipate that a nocturnal turtle-watching trip would be part of my weeklong journey to northern Costa Rica, but then, I didn’t know what to expect from this Latin American country best known for its coffee. What I discover is two countries in one: a temperate rainforest filled with showy tropical plants and abundant wildlife, and a warmer coastal region of sunny skies and surf-worthy beaches.

The best thing is that we don’t have to choose between the two – jump in a car and you can drive from one region to the other in about five hours. And both are within one to three hours of the international airport near Liberia.

We start our trip near the town of La Fortuna, in the shadow of the Arenal volcano, which erupted regularly until 2010. The Nayara Hotel, Spa and Gardens is our temporary home.

After a breakfast of huevos rancheros, fried yucca and gallo pinto (mixed black beans and rice), we’re offon a floating tour of the Penas Blancas river, about half-anhour from La Fortuna, with Desafio Adventures.

Our guide, José, does most of the work steering our inflatable raft down the river, but he warns us that he’ll need us to pitch in from time to time.

One member of our group is eager to see a sloth and José doesn’t let her down – we spot both the two-toed and three-toed varieties languishing in the dense foliage, along with toucans, kingfishers, egrets, herons and iguanas.

There’s one thing you should resign yourself to when you visit Costa Rica’s rainforest, especially in the rainy season – you’re going to get wet.

But we’re due for a change of scenery and climate. As we cross the continental divide that bisects Costa Rica into east and west, everything changes – the mist that obscured our views for days gives way to clear blue skies, and lush jungle turns into drier ranchland. By the time we arrive in Playa Tamarindo on the west coast, we peel offour rain jackets and slather ourselves with sunscreen. Tamarindo is a typical small beachside town, with a string of restaurants, bars, souvenir and surf shops lining the main drag and one large hotel, the Tamarindo Diria Beach and Golf Resort, on the water’s edge. Within half an hour of arriving, we’re in our bathing suits and on the beach. For anyone who loves to surf – or who has never tried it, this is the place to do it. Boards and lessons are both available through the hotel, as are turtle-watching tours.

For some, rain or shine, that’s the ideal Costa Rican vacation.

Q REPORTS (DW) In Peru, the left-wing village school teacher Pedro Castillo has in all probability been elected the new president. The fact that...
Business