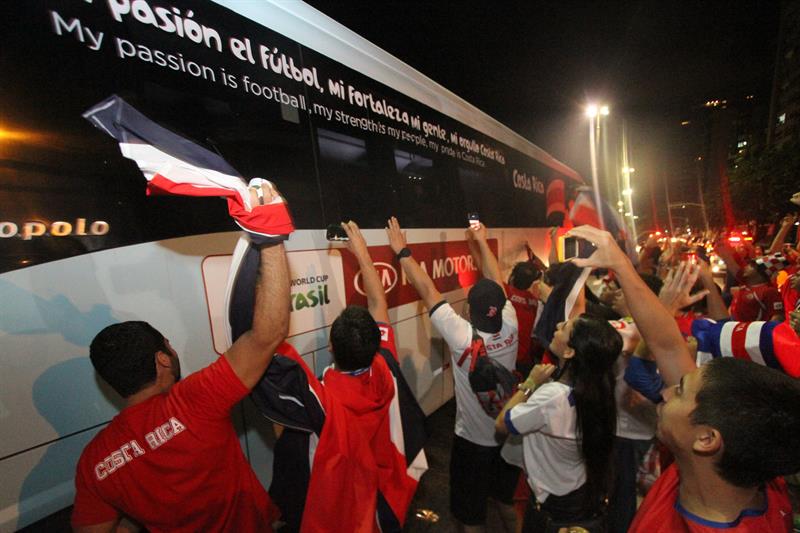 Costa Rica’s national team is determined to be the first to score in their match up this afternoon with Greece. In fact, the team’s star player Bryan Ruiz promises Costa Rica will go on the attack at the blow of the referee’s whistle  starting the game.

Ruiz said there will be no change in Costa Rica’s adventurous spirit when they and Greece contest the status of underdogs in Recife.

Having dealt with three World Cup champions (Italy, Uruguay and England) and come out unbeaten in the first round of play, the Ticos are confident of more success as they and the Greeks both target their first World Cup quarter-final.

“Many thought we were here just to here participate (for show) and not compete,” said Ruiz. “‘It is a dream come true to be in this round. It is going crazy back home in Costa Rica.”

Coach Jorge Luis Pinto says the Ticos can beat Greece by thinking big. “‘We’re not giants but we are not dark horses either,” Pinto told the media Saturday. “We are still writing the history of football for our country,” he said. “For that reason, because we know how much the country is enjoying our World Cup, we want to do it right. We are not favourites. Greece are a strong team, aggressive as well as technical, who have some very good players.”

“We know we have surprised the world, not just our country, and there is no ceiling on our performance. We want to go as far as we can but we must approach this game in exactly the same way as we approached the others. We trust in ourselves, try to control the space, and do the defensive work we usually do,” said Pinto.

[su_pullquote class=”H2″]” We’ve been practicing shooting from the penalty spot,” Luis Marin, Costa Rica technical assistant[/su_pullquote]The coach says he has done his homework on Greece already, not just reviewing their games in Brazil but even finding tapes of Fulham in action to familiarize himself with the players based in England. Like Costa Rica themselves, Greece are mostly formed of home-based players plus a few with lesser clubs around Europe.

The Greeks have developed a reputation over the years of being extremely hard to break down, particularly if they take the lead, and the Ticos technical assistant Luis Marin said his team need to score early to prevent their opponents from going in front.

“It’s crucial for us to score early in the game, especially as Greece are known to tighten up at the back once they score,” said Marin.

“But we know it’s going to be a tough game all round. Although they (Greece) lost to Colombia 3-0, the goals they conceded were down to simple mistakes. Greece are also potent on the counter-attack.”

Marin added: “Penalties could play a role at some point. They are a part of the game and although we hope it doesn’t happen, we have to prepare for every scenario. We’ve been practicing shooting from the penalty spot.”

“We want more than just playing this far,” said Pinto, who is looking to take his team past the glory of Italy in 1990, when they last reached the round 16 of a World Cup before,  but never any further and never have they posted such surprising results.

QCOSTARICA - The Caja Costarricense de Seguro Social (CCSS) reports that 70.3% of people over 58 years of age, the so-called Group 2 of...
Economic Recovery