Costa Rica Has The SLOWEST Mobile Internet On The Planet; Report

Q COSTA RICA – Your mobile Internet connection in Costa Rica too slow and too costly? Feel that accessing Facebook, YouTube, Netflix, Waze, Instagram, Twitter and in even Google on the go is too slow? And the cost to high?  Take our word and the results of a survey by the British company, Open Signal, you, we, are paying for one of the slowest mobile Internet connections on the planet.

According to OpenSignal (February 2017 report) measuring mobile Internet connection speeds in 87 countries, Costa Rica has the slowest connection of them all.

Open Signal defines overall speed as the average mobile data connection a user experiences based on both the speeds and availability of a country’s 3G and 4G networks.

The backwardness of Costa Rica. What is disturbing is that Costa Rica is ranked pretty high in terms of mobile Internet penetration. According to the Superintendencia de Telecomunicaciones (Sutel) – Costa Rica’s telecom regulator – in Costa Rica there are 4.8 million smartphones with Internet access, that is like 101 connections for every 100 inhabitants (based on 2015 population survey).

These subscribers are literally glued to their networks. In 2014 they consumed 38,000 Terabytes (TB) and, a year later, almost doubled that at 75,000 TB according to the Sutel, which justifies the slow speeds with “as the connections become saturated, the speed drops”.

“Costa Rica has a high penetration of mobile Internet but little of fixed Internet (as in hardwire connection by cable or telephone land line). With this disparity, the mobile Internet is saturated and offers poor connections,” explained Rosalía Morales, executive director of NIC Costa Rica, the country’s domain registrar, top level “.cr” and part of the National Academy of Sciences.

Luis Amón, spokesman for telecommunications issues at the Cámara de Tecnologías de Información y Comunicación (Camtic) – Chamber of Information and Communication Technologies, blames the government in that, since the opening of the telecom market six years ago, the Sutel has not released more radio spectrum and assign it to mobile operators and improve connections speeds.

The government admits to the lags but claims to be dealing with the problem.

“Yes, we are clear about the challenges of increasing (connection) speeds. In Costa Rica, we have achieved a greater penetration of the service. Now is the challenge of speed,” said Edwin Estrada, Vice Minister of Telecommunications, who added that the government is currently in the process of auctioning the 70 Megahertz band among mobile operators to accelerate access to the web and to fuel competition.

The vice minister accepted that “there is much to improve” and stressed the government is progressing in improving infrastructure.

By the numbers. The Open Signal report does not analyze the number of services per inhabitant, but the performance of the network.

All data, says the company, were taken from Users who had installed the OpenSignal mobile app for Android or iOS (Apple devices).

Click here to go to the Open Signal website for the interactive graph, global picture and much more data on global mobile internet connections. 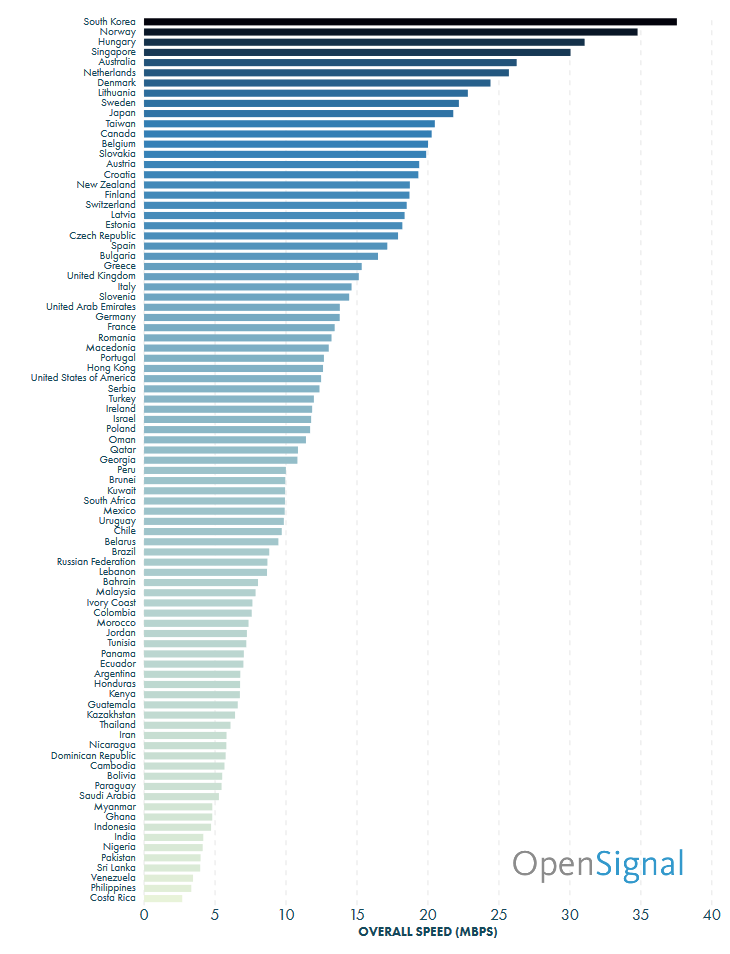 Costa Rica has the cheapest mobile Internet in Central America

QCOSTARICA - Costa Rica is the only country in Central America...
Read more