Pedestrian Deaths Doubled In The First Month of 2017

Q COSTA RICA – The lack of sidewalks, bad drivers, lack of enough police presence, negligence, recklessness and irresponsible actions by some have resulted in an increase in pedestrian deaths and traffic fatalities in general across the country.

In the first month of 2017, eleven pedestrians lost their lives, according to the Ministry of Transport (MOPT).

The number worries transport authorities because it is double the number of pedestrians killed in January 2016. Six pedestrians lost their lives in that month.

In addition, January 2017 is the month with more pedestrians killed in the last three years. October 2016 had set the record, with nine deaths.

“The January numbers caught us by surprise. We had expected a maximum of seven deaths, the same in December 2016. Unfortunately, people are negligent, they are in a rush and do not heed to basic road safety recommendations. It is impossible for us, with about 250 officers per shift, to monitor five million people. It should be up to each and every individual, for the love of oneself, to take care when crossing a road,” said Mario Calderon, director of the Policia de Transito (Traffic Police).

In 2016, the Traffic Police only issued eight ‘traffic tickets’ to pedestrians, for things such as not using pedestrian overpasses and jay-walking.

By the numbers. Almost half (197) of the traffic fatalities in 2016 were motorcyclists. Collisions between vehicles claimed the lives of 213. Other causes (including pedestrians) resulted in 84 deaths, the number includes 14 pedestrians casualties of a hit and run; vehicles that ran off the road accounted for 101 deaths; rollovers, 32; hitting fixed objects, 31; and drivers who fell asleep behind the wheel, 4. 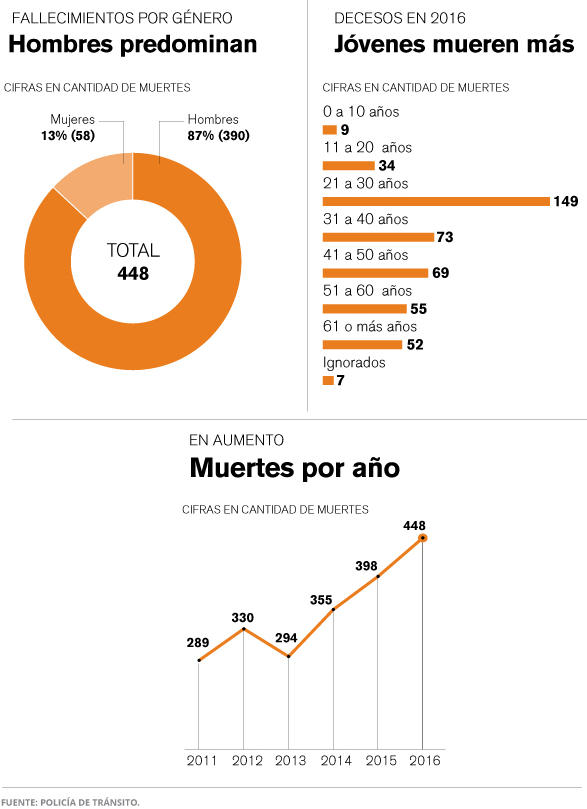 The above charts prepared by La Nacion from data of the Policia de Transito, reveals more men than women die on Costa Rica’s roads (87% men compared to 13% women); those between the ages of 21 and 30 are the single highest group with fatalities, followed by 31 to 40 and 41 and 50.

- Advertisement -
Paying the bills
Previous articleAustralia May Not Take Central American Refugees in Costa Rica in U.S. Deal
Next articleCosta Rica Has The SLOWEST Mobile Internet On The Planet; Report

(TODAY NICARAGUA) Gregorio could not say goodbye to his father. When...
Read more

A large truck crashed into a crowd of people gathered on...
Read more