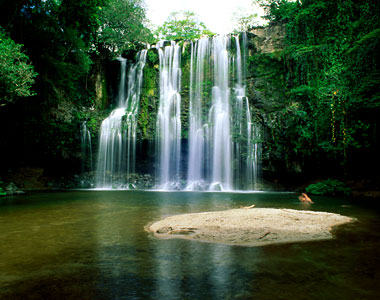 What should you do if your child has hiccups? Tell them to hold their breath? Drink water? Give them a shock? In Costa Rica, you should tear off a small piece of paper and stick it in the center of the forehead with your saliva. Is it effective? Probably just as effective as any old wife’s tale, but it is the frequently used solution here.

Costa Rica has many natural remedies and interesting solutions to common and rarer medical complaints, just as any country or culture. And just as in any other culture or country, the sensible approach to these is to use them in conjunction with any prescribed medication and with the approval of your medical fractioned. Costa Ricans, especially those who live in more rural areas are often firm believers in natural cures. Many markets will stock plants, herbs and leaves which are believed to have medical benefits with the wide selection of fruit and vegetables. Some common ones are:

Sorosi is a green leaved climbing plant which is used for ‘blood cleaning’. Drinking tea from the boiled plant is thought to clean your circulation if it is drunk two or three times a week, but not more. It is also frequently used to obtain relief from mosquito bites. The plant is simply crushed into cold water and applied to the bites. It should then be left to soak in and provide the patient with relief from itching and swelling.

Cheney Root is a dark red root, usually sold in roughly cubed pieces. This is usually recommended as a remedy for anemia, as it is rich in iron, but it has been suggested that it also an effective aphrodisiac! It can be drunk as a tea, after boiling or allowed to cool and drunk straight from the fridge.

Fever grass is commonly found growing and is a long spiked grass plant. It is boiled as a tea to bring down fevers.

Travelers with fair complexions should be delighted to discover that Aloe Vera is easily found growing in Costa Rica or whole leaves can be purchased in many markets as a welcome relief from the pain of sunburn and is much cheaper in its wild form than in the processed over the counter remedies that travelers can buy from the pharmacy at home! Another traveler’s friend is cinnamon tea (canela) which can be simply bought in bag form in any grocery store. This is a greatly eases the stomach cramps that accompany the unpleasant stomach bugs that tourists sometimes suffer from. It can be made from cinnamon sticks too which again can be bought in most grocery stores. Pipa water which is obtained from green pipa coconuts is a good rehydration liquid should you fall foul of Montezuma’s Revenge as it is pure. For this reason, it is a recommended hangover cure too!

Ideally, you will come prepared to Costa Rica with vaccines updated and a travel kit to provide band-aids for blisters and antiseptic cream for any cuts or opened bites, but you may wish to dabble in natural remedies too.

For those people who have a real interest in homeopathic medicines, the Noni is worth investigation. The ugly, foul-smelling fruit is grown mostly in the Caribbean region of Costa Rica where its juice has been drunk by many local inhabitants on a regular basis, due to the strong belief in its multitude of health benefits. Research is currently underway to examine whether the fruit can help to eradicate some forms of cancer but there is no firm medical evidence to support this belief. It is now available in bottled form for those who which to take it home.