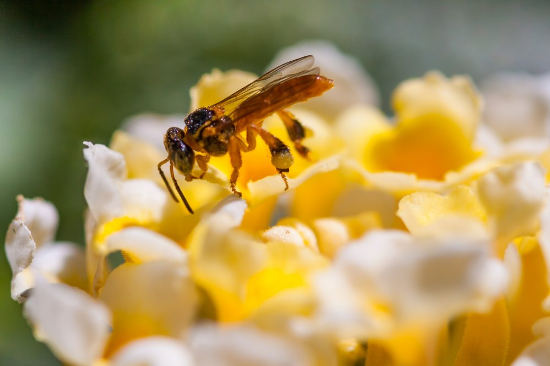 QCOSTARICA – Once Costa Rica was a major world exporter of natural honey but this year it appears that the country may wind up with bare shelves in the honey jar sections of supermarkets.

The climate has conspired against apiculture with the drought cutting down on the amount of pollen present in flower and tree blossoms.

National University bee experts predict only about a third of normal production this year. The strewing of ash from Turrialba Volcano has not helped, either.

When bees have to fly long distances to find pollen, they or the next generation of bees often consume the major amount of the honey produced in the hive, university researcher Johan Van Veen says.

But most damaging has been the high winds this year which bees in their quest for pollen have had to fight while flying, he added. The researcher is supported by Enoc Fernandez, a bee keeper in San Ramon who estimates that his bees will produce about half of the 2014 production.

William Mora of Tarrazu was not specific in his prediction for this year but said it was likely to be the lowest production in four years. But he pointed to another cause for worry: the fumigation of avocado trees with pesticides just when they are flowering and the busy bees visit them for pollen.

The worst blow for apiculture came in the 1980s when the waves of Africanized bees made their way up from Brazil where they had been accidentally freed. Not only are those bees more agressive, but they also produce less honey than the European bees they replaced.

By Amy Gdala, Guest Contributor - The US has a surplus of vaccines, while Costa Rica is struggling to supply sufficient numbers to citizens...
El Salvador