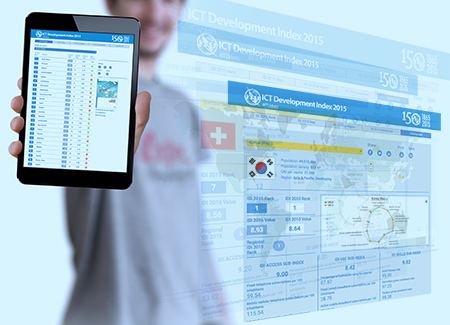 QCOSTARICA – In the Americas, Costa Rica achieved the most dynamic improvement in levels of information and communication technology (ICT) access, rosing 23 places in the global rankings, according to the latest ITU annual global ICT data and ICT Development Index (IDI) country rankings.

Taking into consideration all the indicators, which also include Internet access, mobile telephony, broadband, computers, fixed telephony, etc. Costa Rica is ranked 57, up from 80.

In the Americas, the United States, Canada and Barbados lead the IDI rankings, with IDI values above 7.50, and global rankings in the top thirty economies. These three countries significantly outperform all other countries in the region, with IDI levels approaching one whole point above the next highest regional performer, Uruguay. Some 29 of the region’s countries fall within the top half of the global rankings.

Countries in the Americas region have experienced some of the most significant movements up and down in global IDI rankings between 2010 and 2015.  In addition to Costa Rica,  other countries achieving substantial improvements were Suriname, Brazil, Barbados and Colombia. However, a number of countries, particularly in Central America and the Caribbean, fell significantly, including Belize, Cuba, Grenada, Jamaica and St. Kitts and Nevis.  Click here for the ICT Development Index 2015 ranking

Globally, the ITU says more people are online than ever before, but growth has slowed. By the end of this year, 46% of households globally will have Internet access at home, up from 44% last year and just 30% five years ago, in 2010. In the developed world, 81.3% of households now have home Internet access, compared to 34.1% in the developing world, and just 6.7% in the 48 UN-designated Least Developed Countries (LDCs).

Latest data show that growth in Internet use has slowed down, however, posting 6.9% global growth in 2015, after 7.4% growth in 2014. Nonetheless, the number of Internet users in developing countries has almost doubled in the past five years (2010-2015), with two thirds of all people online now living in the developing world.http://www.itu.int/en/Pages/default.aspx

Fastest growth continues to be seen in mobile broadband, with the number of mobile-broadband subscriptions worldwide having grown more than four-fold in five years, from 0.8 billion in 2010 to an estimated 3.5 billion in 2015. The number of fixed-broadband subscriptions has risen much more slowly, to an estimated 0.8 billion today.

ITU’s IDI is widely recognized by government, UN agencies and industry as the most accurate and impartial measure of overall national ICT development. It combines 11 indicators into a single measure that can be used as a benchmarking tool globally, regionally, and at national level, as well as helping track progress in ICT development over time. It measures ICT access, use and skills, and includes such indicators as mobile cellular subscriptions, households with a computer, Internet users, fixed and mobile broadband Internet subscriptions, and basic literacy rates.

QCOSTARICA - Imagine your vehicle being devoured by a...
Politics