Q COSTA RICA – The U.S. State Department published this morning the 2017 Report on Trafficking in Persons, in which Costa Rica shows a significant improvement.

The Trafficking in Persons (TIP) Report highlights the responsibility of governments to develop and enforce laws that classify trafficking as a crime, incarcerate offenders, and protect victims. These processing efforts are crucial to fighting human trafficking.

In the case of Costa Rica, the government demonstrated its efforts, compared to the previous report period, so the country rose to a level in the report evaluation scheme, at Level 2.

Among the main efforts are:

• Increased delivery of funds from its national budget to government institutions working against trafficking and smuggling.
• Provide funds and technical support to open a second emergency shelter.
• Address complicity in accusing an ex-mayor and four suspected accomplices on charges of establishing a trafficking network.
• Identify more victims of trafficking than the previous year.
• Improvement of activities to raise public awareness about forced labor.

Traffickers around the world, in every region and almost every country, exploit more than 20 million victims in forced labor and sex trafficking. This multi-billion dollar industry destroys families and communities, weakens law enforcement, strengthens criminal networks and offends universal concepts of human decency.

The Government of Costa Rica does not fully meet the minimum standards for the elimination of trafficking; however, it is making significant efforts to do so. The government demonstrated increasing efforts compared to the previous reporting period; therefore, Costa Rica was upgraded to Tier 2. The government demonstrated increasing efforts by disbursing funds from its national anti-trafficking and smuggling fund to key government 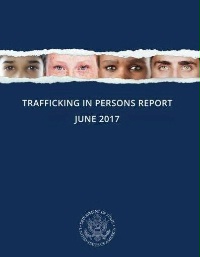 agencies for the first time; providing funds and technical support to open a second emergency shelter; addressing complicity by indicting a former mayor and four suspected accomplices on charges of establishing a trafficking network; identifying more trafficking victims than in the previous year; and improving public awareness-raising activities about forced labor. However, the government did not meet the minimum standards in several key areas. Prosecution efforts remained weak and publicly funded victim services remained insufficient to care for the number of victims identified.

Intensify efforts to investigate and prosecute trafficking offenses, including labor trafficking and cases not involving movement under trafficking-related criminal code provisions, and convict and punish traffickers; amend legislation to define human trafficking consistent with international law; increase the disbursement of funds for victim services and provide specialized shelter and services for trafficking victims, including men, in partnership with civil society organizations; improve victim identification and referral, and investigations and prosecutions, particularly in cases occurring outside of the capital; improve screening of individuals in prostitution for indicators of trafficking, including during raids; conduct thorough and transparent criminal investigations of alleged government complicity in trafficking offenses and prosecute, convict and punish complicit officials; increase efforts to investigate, prosecute, and convict child sex tourists and others who purchase commercial sex acts from child trafficking victims; increase anti-trafficking training for police, prosecutors, and judges; and improve data collection on law enforcement and victim protection efforts.

The 2013 law mandates CONATT to coordinate assistance to trafficking victims, which includes emergency, short-term, and long-term assistance. The government updated its protocol for officials on the immediate response team responsible for certifying victims and updated its protocol for coordinating among various agencies and NGOs to provide victim services, which could include food, lodging, and health, financial, and psychological support. Authorities had the discretion to refer victims to services on a case-by-case basis; not all victims received the same level of protection. Civil society organizations reported referral mechanisms were not always implemented in an effective or timely manner. The government acknowledged it was challenged in using the referral mechanism by large increases in migrants in the country in 2016. The government, through the National Anti-Trafficking in Persons and Smuggling of Migrants Fund (FONATT), disbursed 122 million colons ($223,443) to fund trafficking victim services in 2016, the first time it had used the fund. Separately, through its child welfare agency, the government provided direct funding to an NGO-run shelter for child victims, a per-victim subsidy for victims it and the NGO identified, and directed 91 million colons ($166,667) in lottery funds to NGOs providing services to trafficking victims. Remaining services were funded and provided by NGOs. The government does not provide dedicated shelters or specialized services to male victims, although the emergency shelter and safe houses can be used for male or female victims. The government provided medical and psychological services, legal services, and support for victims assisting criminal proceedings.

The government increased prevention efforts. CONATT continued to meet quarterly and coordinate the government’s anti-trafficking activities and funded an international organization to develop a new national action plan for 2017-2020. In 2016, the government obligated $1.15 million of the total $1.8 million available in 2016 for programming from the FONATT to public awareness raising and the establishment of a headquarters for CONATT, which will house the immediate response team and a 24-hour emergency short-term shelter for victims. Authorities financed a national public awareness campaign, distributed brochures and posters, publicized the 9-1-1 hotline with anti-trafficking messages on national lottery tickets, and held public events to warn about the dangers of trafficking. The government made efforts to reduce the demand for commercial sex acts and forced labor. The government worked to reduce the vulnerability of children of migrant indigenous workers in the coffee sector by expanding the availability of child care centers. The government educated labor recruiters for international and domestic businesses about the consequences of violating the anti-trafficking regulations, but did not report investigating or penalizing any labor recruiters for illegal practices that contribute to trafficking. A quasi-governmental agency continued conducting trainings on combating child sex tourism for members of the tourism industry. The government convicted an individual for promoting Costa Rica as a child sex tourism destination and imposed a sentence of five years imprisonment for the first time in November 2016. The government continued to investigate and prosecute individuals that paid child trafficking victims for commercial sex, resulting in 35 investigations and at least one conviction in 2016. Working in collaboration with international partners, the government reported denying entry to 71 foreign registered sex offenders attempting to travel to Costa Rica as tourists in 2016, compared to 53 in 2015. The government and NGOs provided anti-trafficking training to its diplomatic personnel.