Costa Rica is a Top Port of Call for Cruise Ships 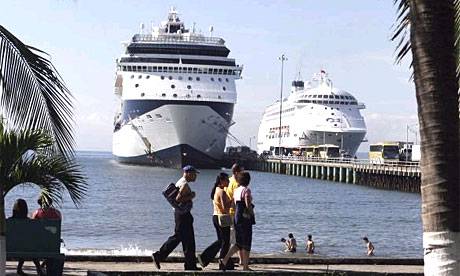 Travelers who are looking for a tropical destination on their next vacation might want to consider a cruise. 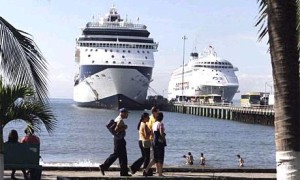 There are so many benefits to cruising. You get to visit multiple countries, islands or points of interest all on the same trip without hassling with transportation, border crossings or logistics. On a cruise, you unpack once and your floating hotel takes you from place to place. Dining, entertainment, recreation, and nearly your every want and need are taken care of for you.

Costa Rica has become a hot port of call for cruises to the Panama Canal, Central America and Western Caribbean. The Central American country borders both the Pacific Ocean and the Caribbean Sea, and offers cruise ship ports on both coasts. Cruise itineraries either stop at the Port of Limon on Costa Rica’s Caribbean Coast, or the Port of Caldera or Puntarenas on the Pacific Coast, or both coasts.

This 2013-2014 cruise season began already on September 1. Costa Rica expects to receive a total of 130 cruise ships docking at the ports of Puntarenas and Caldera on the Pacific, and 59 sailing into Limón, according to data provided by the agencies that manage both of these ports. During the 2011-2012 seasons, a total of 345 cruise ships docked at Costa Rica’s ports. The Costa Rican Tourism Board (ICT), along with tourism businesses, are seeking to improve Costa Rica’s position in the cruise ship market by streamlining procedures and improving safety at the Pacific and Caribbean ports.

Small ship cruise lines like Star Clippers or Windstar Cruises spend several days visiting various points of interest in Costa Rica. For example, Windstar offers 7-day cruises up and down the Pacific Coast of Costa Rica. Cruise ship travelers who would like to explore Costa Rica more in-depth can visit the country before or after a cruise, either on their own or on an organized tour.

Most cruise passengers seek out Costa Rica for its ecotourism opportunities. Effectively a biological corridor between North and South America, Costa Rica’s Neo-tropical climate and rainforests harbor one of the greatest biological diversities in the world.

Veragua Rainforest is one of the best Costa Rica ecotourism shore excursions for cruise visitors to the Caribbean port of Limon. Normally, passengers only have a few hours to experience as many of Costa Rica’s wonders as possible, and want to do so with minimal on-shore travel time. Veragua Rainforest is located an hour away from the port of Limon and offers both half-day and full-day shore excursions.

The research and adventure park is one of the top nature and adventure attractions in Costa Rica’s Caribbean region; plus, it is an important national scientific investigation center. The 3,212-acre (1,300-hectare) park is located in an area of breathtaking tropical rainforest in the foothills bordering the vast La Amistad International Park. Attractions include an aerial tram, canopy zip-line tour, hiking trails through the rainforest and by a river with waterfalls, wildlife exhibits and science labs.

A Southern California native, Shannon Farley writes English-language blogs and social media marketing for Enchanting Costa Rica and Profimercadeo, both based in San Jose, Costa Rica. She is a professional journalist who spent an 18-year hiatus in tourism and business management, and has since combined all three talents in her current work.