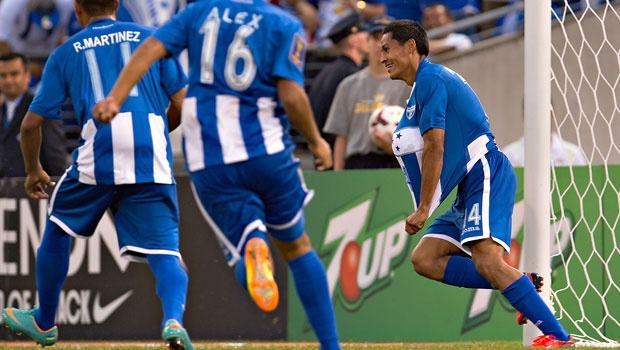 Costa Rica had most of the ball and laid siege to the Honduras goal in the dying minutes of their Copa de Oro (Gold Cup) quarterfinal, but the Catrachos were the only ones who were able to make anything of their chances. Some very effective, albeit frantic defending from Honduras in the closing minutes allowed them to make the most of their one goal and hold on for a 1-0 win, advancing Honduras to the Gold Cup semifinals.

The first 30 minutes of the match was slow, as both teams tried to find their footing and struggled to create clear chances. Around the half-hour mark, things picked up considerably. Jorge Claros went close with a shot in the 31st minute and Costa Rica had a shot blocked on the other end just a second later. Honduras turned right around and attacked quickly, with Alexander Lopez forcing a save out of Patrick Pemberton.

Andy Najar was one of the Hondurans’ most lively and dangerous players at the end of the first half. Early in the second, his aggressive and persistent runs off the ball paid off with the winning goal. Lopez set it up with a brilliant cross from the right flank and Najar made the perfect run, cutting inside from the left to get his head on the ball and nod past Pemberton, giving Honduras a 1-0 lead.

That goal sparked Costa Rica — and more specifically, Alvaro Saborio — to life. Saborio was brilliant from then until the end of the match and came close to scoring on three occasions shortly after Najar’s goal. He had a shot blocked in the 56th minute, headed just wide in the 60th minute and had a shot saved two minutes after that.

In stoppage time, Costa Rica absolutely laid siege to the Honduras goal, but the Catrachos were able to hold on to their clean sheet. A Costa Rica free kick in the 90th minute was barely cleared away, and that was only the beginning of the eventual losers’ late push. Yendrick Ruiz had a header barely saved by Donis Escober in the 93rd minute, with the Honduran keeper fumbling before he recovered on the line. With his team’s final effort of the game, Mauricio Castillo ripped a shot wide from 12 yards in the 94th minute as his teammates put their heads on their hands.