Costa Rica Parks on Alert for Outbreak of Forest Fires 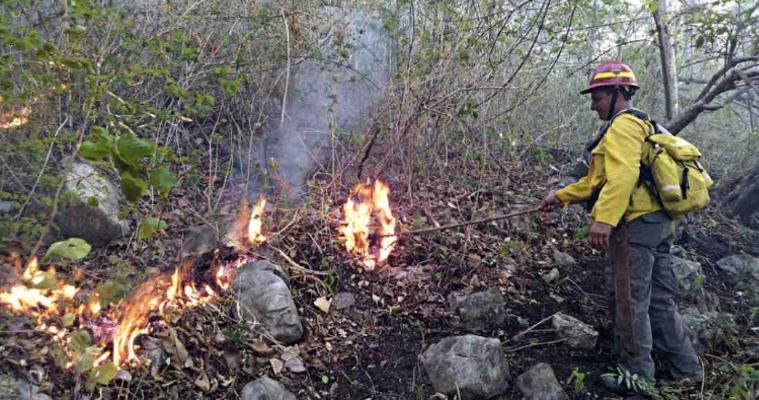 By: Arianna McKinney, Vozdeguanacaste – Costa Rica’s arks and protected areas are on alert for forest fires. The alert went into effect on January 15, but even before then one major fire had already broken out in the Nicoya area.

On Saturday, December 28, 9 hectares (22 acres) were burned in Corral de Piedra, according to Gabino Carrillo Arias, MINAE park ranger in charge of control. It is believed that the fire was caused by  vandalism, although they were unable to find the culprit.

The Corral de Piedra Wetland, located in the district of Corralillo in Nicoya Canton, was decreed a protected area February 23, 1994. Carrillo Arias explained that the 2486-hectare (6143-acre) protected wetland area is composed of 36 private properties, and they also oversee the 740 hectares (1828 acres) of Sonzapote Lagoon.

Both the lagoon and the wetland areas are decreed Ramsar sites, wetlands considered of international importance for conservation due to their ecological and biological importance, especially for  migratory birds. In 2013, Corral de Piedra experienced four other fires, all caused by humans and generally not by accident.

The worst of the four burned 7 hectares, others affected 2 or 3 hectares, and one only damaged half a hectare because people arrived in time to put the fire out effectively, Carrillo noted. A group of volunteers from the community volunteer to fight fires, and they also receive support from the fire commission of the Tempisque Conservation Area (ACT- Area de Conservacion Tempisque), but Carrillo said its very hard to control when the cattails catch fire.

They conducted a campaign of meetings with the community about preventing fires, but vandalism is hard to prevent. When wetlands catch fire, the damage to animal life is of great concern, including birds, turtles, small crocodiles, snakes and more. In addition, Carrillo said invasive plants come back stronger in burned areas.

Another area of Nicoya that is on alert is Barra Honda National Park, a 2300-hectare (5683-acre) forested park with underground caverns. An association of local guides from the nearby communities of Barra Honda, Santa Ana and El Flor also serve as forest firefighters for the park.

According to the park’s administrator, Dorian Mendez Guevara, since the alert went into effect on January 15, the brigade and equipment is prepared and they have been conducting rounds of the park. “It appears that the season, for its characteristics, is going to be very strong,” Mendez Guevara estimated. Aside from the fire in Corral de Piedra and fires in other areas of the country, which isn’t common this early, he also noted that the strong winds dry the land, increasing fuel for fires and accelerating the process.

It has also been very hot earlier than normal, which also increases fuel for fires. The worst months for fires are March and April, the height of dry season.

QCOSTARICA - Changes in consumption habits in terms of times, types of preparation and specialties challenge the coffee sector. Most of the consumers in Costa...
Guanacaste