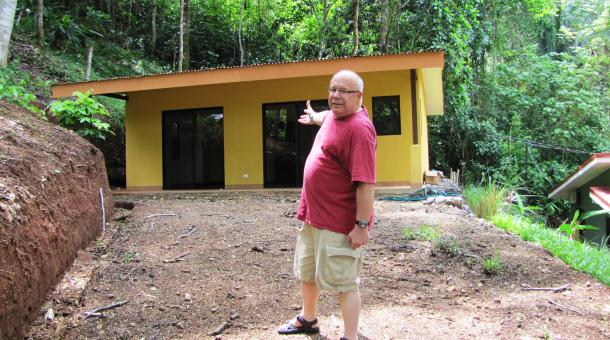 Bill Peace sees his new home in Playa Herradura, Costa Rica for the first time. He moves in next January.

As many as 50,000 Americans live in Costa Rica, according to the U.S. State Department. And many of them are Baby Boomers flocking to the country’s tropical beaches to retire. They’re drawn to Costa Rica’s biodiversity, the political stability, and its cheap health care.

For one Phoenix man, who is about to embark on the journey, Costa Rica is all about adventure.

Peace, 64, is single and counting the days until next January when he’ll leave his management job in higher education. From his office in Phoenix, Peace pulls up photos of his life-to-be in Costa Rica. He’s bought land on the Pacific coast in a development specifically marketed to gringos. He’s building a 720-square foot house. Peace said he’s also leaving behind the days of 24-hour television and constant connectivity.

“I’m looking forward to settling down, and living life for the sake of living life,” he says.

Peace is jumping in headfirst. The land and the house cost $85,000 — that’s more than his entire life savings. Americans still mainly go to Mexico and Canada to retire, but Central America is quickly becoming the next big deal. The number of Americans who collect their Social Security checks in Costa Rica has jumped 67 percent since 2002.

“Costa Rica has the economic and political stability that a lot of people crave,” says Erin Van Rheenen, the author of Living Abroad in Costa Rica. “People who go to a place like Costa Rica thinking their life will be the same, only cheaper and warmer, those are the people are who are going to have a little bit of trouble.”

Back in 2009, Dungan and his wife spent their life savings on a house in Costa Rica. He was happy for a while. But then Dungan discovered someone had been stealing electricity from his meter, and the power company wouldn’t help. When an ATM stole his money, the bank didn’t help either. When the electricity surged during tropical storms, his appliances blew out, “I mean just smoke, and bam!” he says.

The refrigerator, the microwave, a printer — they were all destroyed. As the troubles added up, Costa Rica lost its charm, and Dungan had a revelation: “We shouldn’t be here.”

But they couldn’t go home to Texas just yet, because no one would buy their house. A year later — fed up, and $100,000 in the hole — they simply walked away.

Now Dungan offers this advice: “Don’t buy property. Don’t build a house. Don’t buy a house. The recommendation is rent.” For Americans visiting Costa Rica, however, it’s hard to resist all the advertisements in English that sell the dream of cheap land.

That includes Americans like Bill Peace, who visited his new house for the first time in May. The first phase of Los Tucanes is a development of a dozen or so colorful casitas cast against the deep green of the surrounding jungle. Peace’s casita is simple as can be. It’s made of concrete. It has two small bedrooms. As he pulls up to the driveway, the developer, Rhonda Berg, is there to greet him. The Minnesota native caters mostly to middle-class Americans who are demanding basic accommodations after the U.S. economic crisis.

“People will complain about the type of building we do. We build in the price range people can afford. We are not building high buck. That’s not us,” Berg says.

Still, the second and third phase of Los Tucanes have struggled to sell, Berg says.

When Peace moves in, he’ll be one of two full-time residents. Most of his neighbors go home for months at a time during the rainy season. He knows those who succeed here learn to live like the locals do, with tolerance for heat, bureaucracy and a host of unknowns.

He plans to live on $2,000 a month, which he’ll start collecting next year on Social Security. To cut back, Peace will leave almost everything behind, except his grandmother’s Dutch oven and half a dozen suitcases.