[two_third]According to findings of the Cámara Nacional de Avicultores de Costa Rica (National Poultry Chamber), in 2012 the number of eggs consumed per capita in Costa Rica is 16 eggs a month, that is to say, 200 a year. Ana González, an adviser of Avicultores, explains that the average Latin American consumption is about 100 eggs a year, however, Mexico leads with one egg per day per capita.

The Food and Agriculature Organizaion of the United Nations (FAO) considers the egg the most nutritious in nature.

However, many still restrict including an egg in their diet because it is thought that it can cause cholesterol problems and leads to fatness.

Egg yolks and whole eggs store significant amounts of protein and choline, and are widely used in cookery. Due to their protein content, the United States Department of Agriculture (USDA) categorizes eggs as Meats within the Food Guide Pyramid. Despite the nutritional value of eggs, there are some potential health issues arising from egg quality, storage, and individual allergies.[/two_third]

To Fridge of Not to Fridge?

Go buy eggs in Costa Rica and you’ll find them sitting on an unrefrigerated shelf. 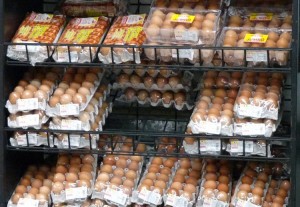 (QCOSTARICA) It's the weekend but it doesn't feel it anymore because the pandemic took away the weekend outings for a beer - a cerveza...
HQ

(QCOSTARICA) A boat of the National Coast Guard Service, in which four officers on board, sank while chasing a drug boat on Thursday morning. The...
Cartago

(QCOSTARICA) Mayden Chamorro still doesn't understand why a man has left her used female underwear outside her home every Thursday. Could it be part of...
Pura Vida

Why is the ‘Aguila’ on its head? The marketing idea that confused Costa Ricans

(QCOSTARICA) You may or may not have noticed by the 'aguila', the iconic eagle logo of the Imperial beer brand, has been seen with...
Pura Vida