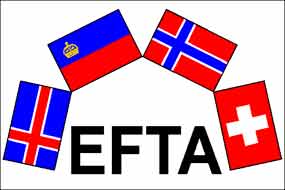 The document, which was also signed by Panama, will help open up new opportunities for trade and investment, strengthening our bilateral relationship and build multilateral cooperation, said Environment Minister, Anabel Gonzalez.

The signature was finalized after five rounds of negotiations between Panama and Costa Rica with the EFTA countries, which concluded in December 2012.

Comex consider this treaty as a continuation of the Association Agreement with the European Union, currently waiting to receive legislative approval, which would complete free trade with Western Europe.

According to the entrepreneurs of the industrial and domestic food companies, the agreement is unnecessary, because the current trade is very low with some of the signatories, the newspaper La Nacion in its digital version said.

Coming July 1 shall enter into force an FTA with Mexico, who signed this agreement also with El Salvador, Guatemala, Honduras and Nicaragua.

- Advertisement -
Paying the bills
Previous articleARESEP Accepts Mistake, But We All Pay!
Next articleFDI In Latin America And Caribbean Hits Record High