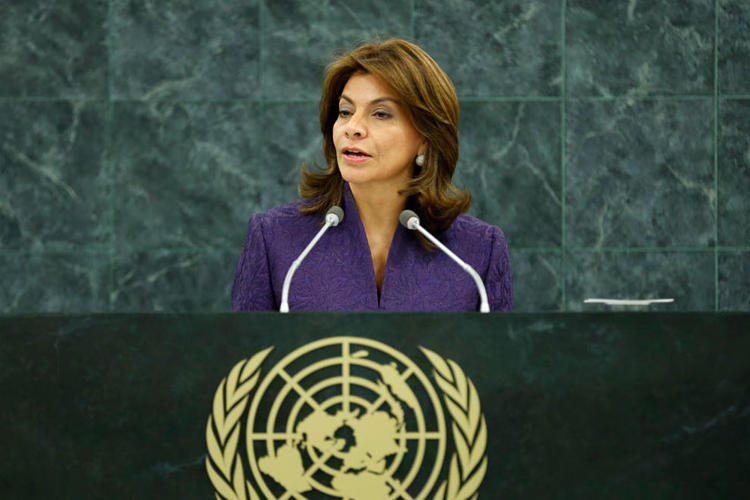 Presidenta Laura Chinchilla Miranda highlighted in an address to the United Nations Tuesday the contribution of young people to the new development agenda through innovation and the use of new technologies.

“Increasingly, innovation, technology, education and culture are recognized as promoters of development, and there is a growing consciousness on the need of actively incorporating youth in these endeavours,” Chinchilla told the General Debate of the UN General Assembly’s 68th session.

“Costa Rica is honoured to have hosted and organized, along with the International Telecommunications Union (IYU), the BYND2015 summit on youth, development, and information and communication technologies.”

Earlier this month, some 700 young people attended the BYND 2015 Global Youth Summit in the Costa Rican capital of San José, and more than 3,000 followed the conference online and contributed their ideas from 43 hubs or workshops in 25 different countries using social media channels.

Chinchilla drew the attention of world leaders to the Final Declaration of the Conference, which urges Governments to provide more flexible, dynamic and open means of governing to reach more people more easily than presently possible. It also calls for education systems that equip students with not just theoretical knowledge, but with a practical mix of marketable, innovative and relevant skills needed to compete in the global digital economy.

“I symbolically present to you the Final Declaration of the Conference, adopted in our capital on the 11th of this month by thousands of young people from every continent. We believe it will be a very relevant input in the discussion of the post-2015 development agenda,” she said.

Chinchilla also stressed the necessity for the international community to implement a preventive approach not just for conflicts but also to avert the effects of global warming and climate change.

“We promote a model of development based upon harmony with nature; solidarity and social inclusion; economic and trade opening; development of our human resources, and innovation.

We realize that development is futile if it is not founded on a profound respect for human dignity and the rights and well-being of the people, including their day-to-day safety,” she added.