Costa Rica To Again Have A Primera Dama (First Lady)

The Spanish born Mercedes Peñas is getting ready to assume the office of the Primera Dama (First Lady), an position that has been vacation for the last eight years.

Mercedes, born in Madrid, Spain has been the common-law wife for eight years of president-elect Luis Guillermo Solís.

Like many foreigners living in Costa Rica, Doña Mercedes arrived in Costa Rica in 1991, with the aim of obtaining a graduate degree at the Universidad de la Paz (Peace in University), and decided to stay. On May 8 she assumes the role of the First Lady. 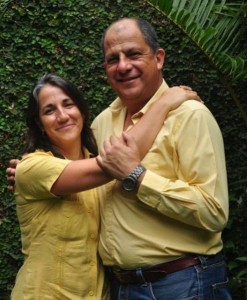 Don Oscar, now re-married, was single during his four years of his second administration, while in the case Doña Laura, José María Rico, never took an active part the administration of his of wife.

According to the little information we have about Doña Mercedes, she is now a political scientist and director of the Fundación para el Desarrollo Local y el Fortalecimiento Municipal e Institucional de Centroamérica y del Caribe (FUNDEMUCA),  which promotes local development in the region.

Luis and Mercedes met while she was studying for her masters in international relations at the Peace University in Costa Rica. The couple have a daughter, Inés.

During the presidential elections campaign, Doña Mercedes said she was not interested in taking over the traditional role of Primera Dama, but to provide the government with her expertise in local development issues.