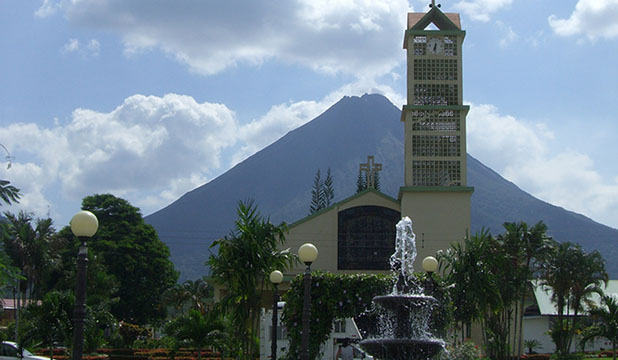 Stuff.co.nz  – Costa Rica isn’t a destination that would make the bucket list of many Kiwis, but it should. It’s one of the most incredible places on the planet in my view.

I doubt many would be able to identify a landmark in this amazing little country in Central America, but landmarks are abundant here, and Arenal Volcano stands firmly at the top of my worldwide list.

This conically-shaped volcano in northern Costa Rica drew me back year after year, both as an independent traveller and as a guide for a Kiwi-based travel company. In a state of constant eruption for many years, Arenal Volcano looms high over the lake bearing the same name and many quaint Costa Rican villages.

It’s entirely covered by virgin rainforest, that teems with wildlife. I’d eat my hat if anyone left one of the numerous hiking trails in and around Arenal without an encounter with a troop of capuchin monkeys, a noisy toucan or a curious coati wondering what all the fuss is about.

You can’t have volcanoes and rainforests without waterfalls either, and they come in the most spectacular form possible in the Arenal area – huge, beautiful and powerful. The most impressive waterfall is the Catarata de La Fortuna, falling a massive 75 metres from a narrow slot in the rainforest canopy.

If all that isn’t enough, the natural hot springs in the beautiful village of La Fortuna at the foot of the volcano are a perfect place to sit back in the evening and watch the lava glowing at the top of the mountain.

My top ten landmarks in the world are:

8. The Statue of Liberty, USA

- Advertisement -
Paying the bills
Previous articleRapist Gets 150 Years Sentence
Next articleHome Remedies: A Formula That Survives The Test of Generations

QCOSTARICA - Compared with other countries in the region...
Nicaragua