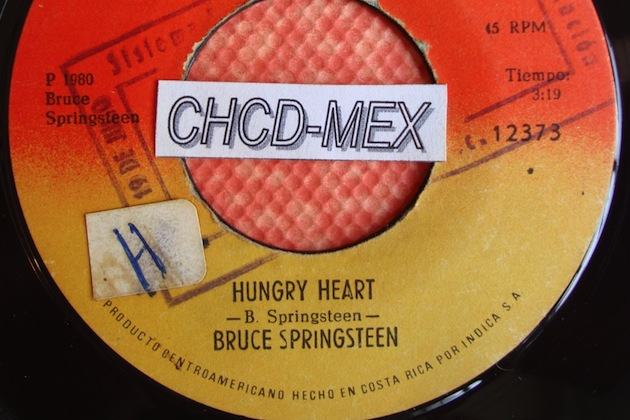 An unusual Costa Rican version of Bruce Springsteen’s 1980 single ‘Hungry Heart’ has sold for $1,310 after 25 bids on eBay. The sleeve even boasts an ink stamp from a local radio station.

Springsteen originally wrote ‘Hungry Heart’ for the Ramones, who were at work their Phil Spector-produced ‘End of the Century’ project, but was ultimately convinced to keep the song for himself at the behest of his manager and producer Jon Landau.

That would prove to be a fortuitous decision: The track would shoot to No. 5 on the Billboard charts, remaining Springsteen’s biggest single until ‘Dancing in the Dark’ reached No. 2 four years later.

This ‘Hungry Heart’ single is backed by Springsteen’s ‘Held Up Without A Gun,’ a previously unreleased song from his sessions for ‘The River.’ The A-side remains a regular part of Springsteen’s concert setlists. Springsteen’s current tour is in Ireland for the remainder of July.

- Advertisement -
Paying the bills
Previous articleAt Pasture
Next articleFollow Your Labels: Your Place in the Global Consumer Chain